Maybe the Global Warming Cultists Have Been Eating Bath Salts

One of the reported symptoms of ingesting bath salts is that your body feels incredibly warm. Which perhaps explains the reluctance of the global warming cult to show you graphs like this.

Call it "The Climate Chart You're Not Allowed to See."

What’s wrong with this image? Well if you are part of The Team (RealClimate and friends), it goes against everything you’ve been publishing. You want the Medieval Warm Period to disappear, and you want a hockey stick at the end showing “unprcedented” warming. The shape below just doesn’t cut it when that’s what you are selling. 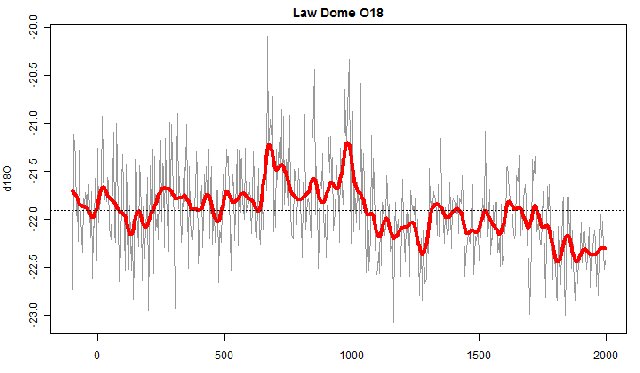 Images like the above don’t sell. With a clear MWP and no hockey stick, there’s no alarm, and no $$ coming in for “further studies”. In the Wake of the Gergis et al retraction, Steve McIntyre notes that one of the “screened out” datasets just happens to be the one with the best resolution and the greatest duration – the Law Dome Oxygen 18 data set (from Antarctica). He writes:

An annual version for two millennia was provided to Gergis (who screened it out.) delD and O18 are closely related and presumably the unarchived del D series will look somewhat similar.

For those that don’t know what this data represents, here’s a quick primer...

In short, this (Law Dome) data series is one of the best historical models possible, as it represents a consistent temperature record over the timespan of thousands of years. And it highlights the United Nations' cover-up of the inconvenient truth, motivated by greed in the form of grant money, carbon-trading land grabs, and coverage by a subservient left-wing media.

A Climategate email shows that Phil Jones asked about the omission of the Law Dome series from the IPCC illustration in the AR4 First Draft. I asked the same question about the AR4 Second Draft. They realized that the Law Dome graphic had an elevated medieval period and thus, including it in the graphic would – to borrow a phrase from the preparation of AR3 – would “dilute the message” and perhaps provide “fodder to skeptics”.

No, that's not from The Onion, a humor publication, but the left-leaning New Yorker. What planet does this president live on? 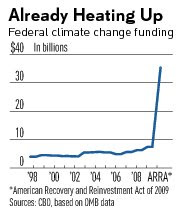 'Obama has an ambitious second-term agenda," wrote Ryan Lizza in this week's New Yorker. "The President has said that the most important policy he could address in his second term is climate change," supposedly to "improve the world."

So forget about the abysmal jobless numbers above 8% for over three years, or the $15 trillion deficit that threatens to turn the U.S. into Greece. No, amid those very real calamities, climate change is more important...

Already no president has ever spent money on "climate change" as he has. The Congressional Budget Office reports that since 1998, $99 billion has been spent among 14 agencies on "climate change." Of that, $35 billion was earmarked from the 2009 stimulus.

The top agency charged with enacting the Obama green agenda — the Department of Energy — has seen its budget soar from $24 billion in 2009 to $38 billion in 2012, the Office of Management and Budget estimates.

...The one thing that can be concluded from this policy priority is that on the environment, Obama is planning more of the same — and the voters be damned.

Enjoying these gas and electricity prices? Well, you ain't seen nothin' yet.

And for those unfamiliar with the genesis of the global warming scam, I created a comic book version of the entire, United Nations-sponsored grift entitled, "This was the moment when the rise of the oceans began to slow."

As I ask the subliterate ecotards who fell for this bullshit: when are you assholes going to pay back the billions of taxpayer dollars pissed away indulging the primitive superstitions of your doomsday cult?