Great News: Mexican Drug Cartels Operating in Over 1,200 U.S. Cities, Up More Than Five Times Since 2008

Well, this CNN report certainly comes as a surprise, given the combination of: (a) a Homeland Security head who encourages open borders and illegal immigration; and (b) an Attorney General who ships thousands of military-grade weapons to the Mexican cartels.

Wilmington, North Carolina (CNN) -- Less than a mile off a county road in Ivanhoe near the Black River, federal drug agents and local authorities found exactly what their informant had promised... "We saw what looked like, as far as you could see, marijuana plants," said Drug Enforcement Administration agent Michael Franklin.

There were about 2,400 in all, surrounded by a makeshift camp where the growers had illegally squatted on private property, setting up a generator and pump to tap the river for irrigation. The camp, which had been recently inhabited, contained a tarp shelter, canned fuel, drinking water, toiletries and old clothing, some of it camouflage... 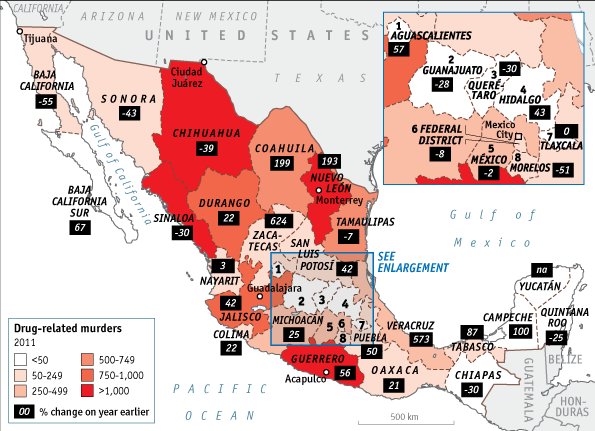 ...[The growers], according to the DEA's source, were members of La Familia Michoacana, a Mexican drug cartel that the Justice Department says focuses primarily on moving heroin, cocaine, marijuana and methamphetamine into the southeastern and southwestern United States.

...The Justice Department's National Drug Intelligence Center estimates Mexican cartels control distribution of most of the methamphetamine, heroin and marijuana coming into the country, and they're increasingly producing the drugs themselves.

In the America I grew up in, citizens were free to go anywhere they chose to visit throughout the 57 states.

In the new, improved Obamerica, the federal government actively encourages illegal immigration and, to try and avoid bloodshed, simply posts signs along interstates that read, and I quote, "Danger Warning, Travel Not Recommended, Drug Smuggling, Active and Armed Gunmen."

Some of my cohorts say that this problem will go away if we just legalize drugs. I'm not so convinced. What say you?