A recent USA Today piece on Democrat SuperPAC "American Bridge" accidentally captured the white board in the conference room at their headquarters.* 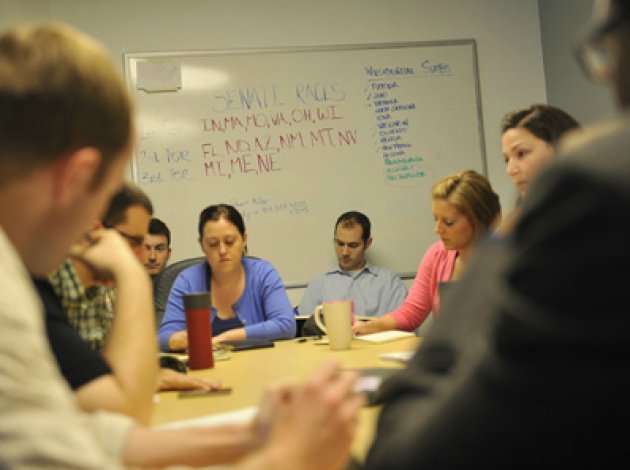 Notice where their biggest priorities are:

And who is "American Bridge"? It's a super PAC created by anti-religion Media Matters founder David Brock and has teamed up with Priorities USA Action, another hard Left super PAC blessed by the Obama campaign.

Now we see that American Bridge has its sights set on at least 15 states, and we have evidence of how they have prioritized them. The Democrats' official war on religion is summarized by @RBPundit:

As we know, ObamaCare's attacks on religious liberty have caused an uproar among Catholics specifically. Catholic organizations are fighting back and, coincidentally, David Brock's SuperPAC is going after Catholic politicians more than any other group. Recently, American Bridge formed a  joint fundraising committee with another pro-Obama SuperPAC called Priorities USA. Priorities USA is run by former Obama Deputy Press Secretary, Bill Burton. But all those connections to Obama's White House and ObamaCare are simply coincidences.

The way these pro-Obama super PACs are supposedly working together is that Priorities is cutting ads/making ad buys, and American Bridge is doing the opposition research and message development. So Media Matters founder David Brock, who has been embroiled in scandal for the last four months and whose organization was founded to root out and exterminate "conservative Christian bias," now has official ties to the Obama reelection effort through this joint fundraising committee, and it should surprise no one if anti-Mormon bias drives lefty super PAC efforts going forward.

* I can assure you that the aforementioned photographer was not Biff Spackle operating deep, deep, deep undercover.

at 8:40 PM
Email ThisBlogThis!Share to TwitterShare to FacebookShare to Pinterest
Labels: Democrats, Obama

staged. disinfo. the participants are all looking down: they knew what the photographer was doing and why.

Hypocrisy of the left again

"... the participants are all looking down: they knew what the photographer was doing and why."

That's because even the left is tired of his lame game.

"the participants are all looking down: they knew what the photographer was doing and why."

People are constantly looking down at their iPhones, iPads and whatever other electronic gizmos keep their attention level at zero.

After her vote for Obamacare, Claire McCaskill of Missouri is toast....

This is great! It looks like they've abandoned Iowa already. Now maybe this steady parade of politicians will stop.