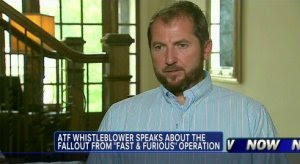 ...a secret wiretap application and testimony from the former head of ATF contradict key claims by Attorney General Eric Holder on whether Justice Department officials knew guns were being "walked" in ATF's Fast and Furious case. Some details of the wiretap application, which are technically under court seal, are revealed for the first time in today's Congressional Record...

...The wiretap application disclosed that Fast and Furious suspects had already purchased nearly 1,000 firearms in Fast and Furious, that they had not been arrested, and that many of the weapons had already been recovered in criminal hands in Mexico. Nine months later, two weapons in the case were used in a shoot-out with illegal immigrants and the Border Patrol that ended in the death of Special Agent Brian Terry. 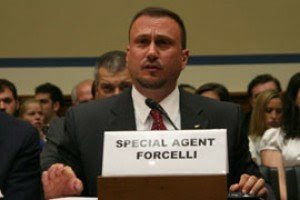 Two Fast and Furious whistleblowers have reportedly been placed under the supervision of an ATF official who allegedly threatened to "take them down."

...When the ATF whistleblowers, Special Agents John Dodson and Pete Forcelli, went public last year, Scot Thomasson headed up ATF Public Affairs. According to an eyewitness, Thomasson stated "We need to get whatever dirt we can on these guys (whistleblowers) and take them down." Now, Grassley and Issa say the agents have been put under the charge of ATF's Scot Thomasson who is Division Chief of the Firearms Operations Unit.

Thomasson was also allegedly heard to have said "ATF needs to f__k these guys." And when asked if the whistleblower allegations were true, Thomasson purportedly said he didn't know and didn't care...

Thanks to heroes like Dodson and Forcelli, as well as true journalists like Sipsey Street Irregulars, Gun Rights Examiner and Sharyl Attkisson of CBS News, it will become increasingly difficult for vintage media to ignore the utter lawlessness of Eric Holder and his out-of-control DOJ.

Oh, and as for the results of Holder's "internal investigation" by the DOJ "inspector general", which has been supposedly been underway since February 2011 -- 18 months, or 50 percent longer than the Warren Commission investigation into JFK's assassination -- not a single word has been forthcoming.

Rep. Issa: it's time to subpoena Holder's "inspector general" Cynthia A. Schnedar. It's time to find out what she knows and when she knew it. Or she can take the Fifth, which would tell us everything we need to know.

at 11:01 AM
Email ThisBlogThis!Share to TwitterShare to FacebookShare to Pinterest
Labels: Crime, Democrats, Firearms, Holder, Obama

It's starting look like the insurance ad with Obama and Holder as the duck in the leaky boat.

Now you know why the French invented the exquisite guillotine.
If the mess in Washington isn't prosecuted to the full extent of the Law this Country of Laws... our Experiment is over.
At this point it looks like the Republicans would rather fry and eat their own genitals than mount up and swing the sword.
Are they leaving it up to "We The People"?

This left-leaning report on Fast and Furious needs some serious fisking!