[There's] a tidy unit of measurement called a "trillion." We can get our heads around the word "trillion," and so we think we understand what we're looking at. In this case, it is the size of our national debt. 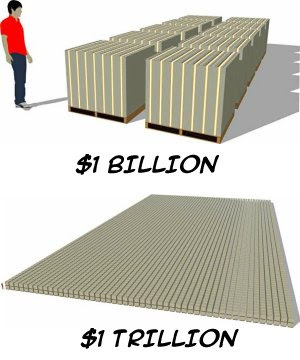 The thing is, it should be really hard to ever get our heads around a "trillion." Very few of us have ever seen a trillion of anything with our own eyes. Maybe a trillion grains of sand, but not a trillion trees or a trillion stars.

...As a nation, we spent $3.6 trillion last year on federal government services, and about one out of every three of those dollars was borrowed. That's a lot of money.

Just how much is a trillion dollars? Consider this: If you have a briefcase full of $100 bills, you'd have roughly $1 million. Few of us have ever seen that much money in one place, but we can at least imagine what it looks like. But a trillion dollars in $100 bills would weigh 22 million pounds!

Things get more interesting if you stack the $100 bills on top of each other, rather than pack them tight in a briefcase. You'd have only $10 billion by the time you got as high as a commercial jetliner cruises. Think about that next time you're up in the air.

If you want to see a trillion dollars of those Benjamin Franklins, you need to penetrate the Earth's atmosphere and keep on going—678 miles high. Our national debt, at 15.8 times that amount, would form a stack of $100 bills 10,712 miles high.

That's why this enormous number is trivialized by shortening it to a word that has only one more letter than its much more benign cousins, "million" or "billion."

Still, "billions" doesn't quite cut it. One billion dollars used to be a lot of money. Today no self-respecting dictator siphons less than that amount into his or her Swiss bank account. It simply wouldn't look good among peer dictators.

Waiting for the New York Times style board, though.
.

Doug:
This is a good idea. I'd suggest we it a step further by requiring every spending bill be stated in cost per household and cost per capita and cost per taxpayer.

Nah, I like to frame these numbers along these lines.

Then we equate that to the budget proposals from the White house. If every worker in the US earned $100K a year, it would take 40 million of them paying 100% of their earnings into the tax system to pay for Obama's spending budget.

Oh, let's add that there are only about 100M people working in the US, so that is about half.

(Double check my numbers there, it is late, and I am doing the math in my head.)