Democrats: More Wedded to Their Ideology Than to the Rule of Law

Exhibit A: Eric Holder, whose acts of perjury and stonewalling -- in a true Constitutional system -- would be opposed by all members of Congress. After all, each branch of government was designed by the Framers to check the corrupting ambitions of the other branches.

But Democrats -- including their self-described Marxist leader, Senator Patrick Leahy -- are more wedded to a failed ideology of collectivism than to the rule of law. And if it means sacrificing the Senate's power to protect the worst attorney general in history, then they're up to the challenge. 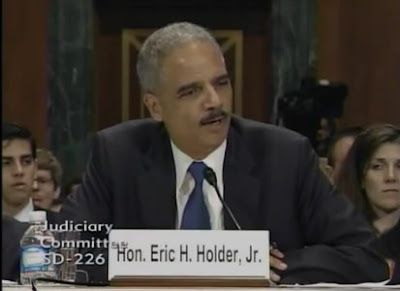 Sen. John Cornyn called on Eric Holder to resign Tuesday as Republicans raised the pressure on the attorney general to avoid a contempt vote by providing documents about the Fast and Furious gun-tracking operation... [He] told Holder it’s time for new leadership at the Department of Justice (DOJ)...

...“It is more with sorrow than anger that I would say that you leave me no alternative but to join those who call upon you to resign your office,” Cornyn said at a hearing of the Senate Judiciary Committee... “The American people deserve better; they deserve an attorney general who is accountable and independent; they deserve an attorney general who puts justice before politics,” he said. “And it’s my sincere hope that President Obama will replace you with someone who’s up to that challenge.”

Cornyn’s remarks came the day after House Republicans scheduled a vote for June 20 on whether to place Holder in contempt of Congress. Rep. Darrell Issa (R-Calif.), the chairman of the House Oversight and Government Reform Committee, has battled Holder for months over a subpoena he issued last October as part of his 15-month investigation of Fast and Furious.

Issa and other top Republicans argue the attorney general is withholding documents and impeding a congressional investigation... Pressure on Holder has been building in the House, where Rep. Paul Gosar (R-Ariz.) has garnered the support of 114 House Republicans for a resolution expressing no confidence in Holder’s ability to carry out his responsibilities as a result of the DOJ’s authorization of “gun walking” tactics in Fast and Furious.

Several quotes best summarize the outrage that is Eric Holder:

• Rep. Patrick Henry to Eric Holder on the delays in the DOJ's "investigation", which, in Febuary, had already longer than the Warren Commission Report on the assassination of JFK:

"Thirteen months later, we have a possibility of somebody actually being punished for an agent getting killed. This is absolutely absurd."

Now, 17 months later, virtually none of the critical documents requested by Congress have been released by Holder. No one has been held accountable for the hundreds killed by Holder's operation. And the results of Holder's "investigation" have yet to be released to Congress.

Read the details of the case and judge for yourself.