After reading this article, the only question that remains is how much longer until the south-side of Chicago is abandoned to nature, like much of Detroit?

More Killed in Chicago this Year than Afghanistan 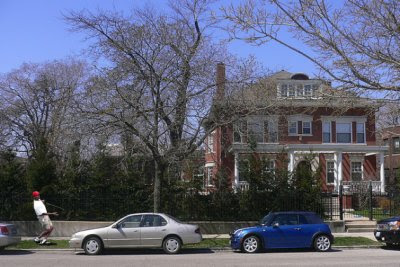 As many as 200 Chicago police officers were assigned to provide extra security for the wedding of White House adviser Valerie Jarrett’s daughter, despite the fact that this year Windy City residents have been slain in greater numbers than U.S. soldiers in Afghanistan...

While 144 Americans have died in Afghanistan in 2012, a whopping 228 Chicago residents have been killed, and the murder rate is up a staggering 35 percent from last year. That’s a rash of homicides quadruple the rate of New York City’s, and police and crime experts fear it may only get worse.

...In the midst of a recent homicide spike and prediction of a weekend weather scorcher, Sneed is told somewhere between 100 to 200 police officers will be dispatched to help “secure the perimeter” of a high-profile wedding in Kenwood.

If you've heard of Kenwood but can't remember why, it's because that's where Barack Obama's home is located. You know, the one that convicted felon Tony Rezko helped the Obama family purchase.

And isn't it striking that where ever Democrats achieve unfettered control of government, society begins to unravel? Detroit and Chicago serve as only two of the most obvious examples, but entire states like California and Illinois are close on their heels.


Postscript: for those unfamiliar with the Grove Parc scandal, gather the entire family around and read the illustrated story entitled 30 degrees below zero.

Just a Liberal bastion of Hope and Change,,,,for the worse!!!

I'm a hundred miles west of Chicago and I remember that winter painfully. Our worst wind-chill reading was -73°.

How could people live through that winter without heat? Surely some of them must have died.

Having said that, I think it's counter-productive to re-visit Rezko, et al. Certainly his relationship with Barry-O taints the Grifter-in-Chief but this isn't really news, nor will it be heard or believed by anyone other than the choir.

I am not suggesting that we ignore all of Teh Won's past sins but, rather, that we cite them only when we can tie them to current malfeasance. It is the last four years that will ultimately defeat Dear Reader. The rest is just a sideshow.

P.S. My apologies if this double-posts. Having more than a little trouble with verification.

Doug, all my medical issues (and there are plenty) are handled at the University of Chicago Hospital. The staff there is wonderful and the doctors and nurses are first rate.


Yet, every time I walk in to the building, I am reminded of the shame job Michelle received, once Baracka became a Senator. It truly takes away a lot of the charm.