Because working Americans are doing so well under the Obamaconomy.

It takes a lot of nerve to ask for a 30 percent pay raise. You’d better be sure you had a banner year. Yet in Chicago, where just 15 percent of fourth graders are proficient in reading (and just 56 percent of students graduate), the teachers union is set to strike if the district does not agree to a 30 percent increase in teachers’ salaries. 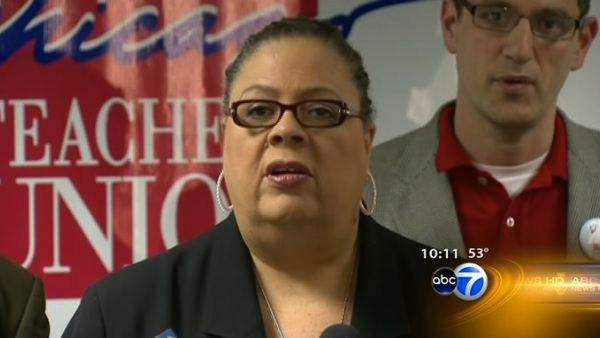 The average teacher in Chicago Public Schools—a district facing a $700 million deficit—makes $71,000 per year before benefits are included. If the district meets union demands and rewards teachers with the requested salary increase, education employees will receive compensation north of $92,000 per year.

According to the Illinois Policy Institute, the average annual income of a family in Chicago is $47,000 per year. If implemented, the 30 percent raise will mean that in nine months, a single teacher in the Chicago Public School system will take home nearly double what the average family in the city earns in a year.

According to the union, 91 percent of its members voted for the ability to strike. That vote gives the union the ability to walk out of public school classrooms as children return to school this fall... The union argues [that] the requested salary increase would compensate them for extending the school day from 5.5 hours—among the nation’s shortest school days—to 7.5 hours.

This is the liberal madness that Ace captions as follows: "The Public Sector Has, In Fact, Lost Jobs. But Does Obama Understand Why?

We're paying more than ever for public sector employees.

So why isn't employment in that sector going up? 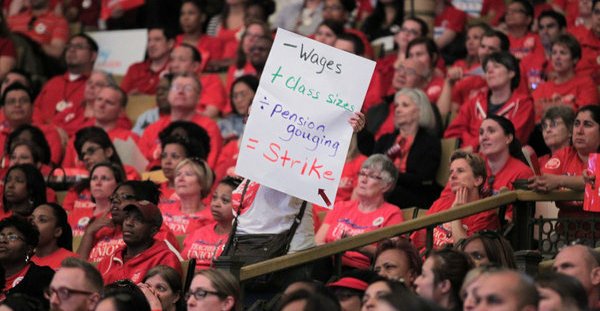 They will not permit the smallest adjustment in their steady march to become Bureaucrat Millionaires.

Ergo, states are finding that even with more money to pay them, they can't pay as many of them.

...Obama's prescription is not to reduce these ridiculous payments to Democratic Clients, of course. He simply wants to give state and local government more money, to pay for the same number of workers, to insure than public employees never have to modify their pigs-at-the-trough appetites for taxpayer dollars.

Not to mention the fact that most of these union members are compelled to pay dues, which are conveniently recycled into President Obama's campaign coffers.

As I said below, the level of wanton lawlessness of this administration -- borrowing hundreds of billions of dollars from future generations to pay off his favorite fundraisers and union bosses -- makes Bernard Madoff look like Mother Theresa.

I never realize there were so many crack smoking lunatics in... where was it? Oh! Chicago you say. Never mind.

Go ahead and Strike, you are useless as teachers. The kids would be better off home schooled.

Don't they also get reductions in their college loans for teaching in underprivileged schools?

I'd give that lady in the first picture a 30% raise, if she'd use it to get a chin tuck.

...then they demand that we fund their exorbitant pensions.

When is enough enough?

I just had a Facebook debate with a public school teacher here in Chicago. Her argument is that since they are raising the number of hours, the teachers deserve more money.

What I took from her argument is that there will be no compromise, that teachers are more important than anyone else in the history of the planet, that there are no bad teachers, that there is plenty of money and if not there is plenty of ways of borrowing. The worst comment was that it doesn't matter if the child doesn't learn. That isn't the teacher's fault. Ever.

Personally, if I were told I had to pay additional 30% for these people, I'd simply either move, or pull a Geithner and pay nothing.

The city of Chicago is so utterly corrupt that it would not surprise me to see Rahm give all black teachers the 30% raise and less for whitey. That's how it works in the windy city.