Spotted the following letter to the editor in today's Wall Street Journal.

I have always known that a picture is worth a thousand words. It has never been more true than in observing the picture that accompanies Hillary Clinton's "Trade With Russia Is a Win-Win" (op-ed, June 20). Presidents Vladimir Putin and Barack Obama are shown shaking hands, and Mr. Putin has clearly taken the power position. 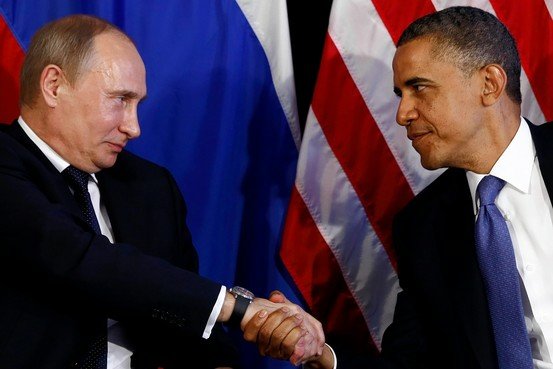 The Russian president has his hand on top, pointing down, while Mr. Obama's is on the bottom, pointing up. There is a nonverbal message being conveyed here, and I for one don't like the implication.

Vince, this is easily explainable. The president can't bow while he's sitting down, for heaven's sake!

Actually, Vlad and I were golfing a few weeks ago and he said to me, "This sissy-boy you have you call a 'president' - he is such a godsend for us. We still believe in the hegemony, and this little girly one will make everything easy for us. It will be amusing to watch him cry when we put him before the firing squad and raise our flag over Kenya."