Remember when WE used to be able to send people into space?

Of course, that kind of antiquated activity predates the moment when the rise of the oceans began to slow and our planet began to heal.

I refer to this BBC story:

China is to make its first ever attempt at manually docking a spacecraft with another space module. 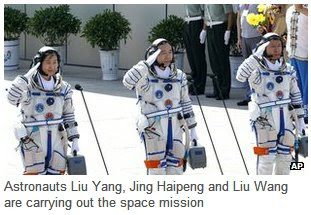 Astronauts on the Shenzhou-9 spacecraft will try to dock with the Tiangong-1 lab module without relying on an automated system.

Jing Haipeng, Liu Wang and China's first female astronaut, Liu Yang, will attempt the manoeuvre, which must be carried out very delicately.

Authorities in China said the docking would take place at around 04:00 GMT.

Liu Wang will be in charge of the manual docking manoeuvres, while Liu Yang will conduct aerospace experiments, according to AFP news agency.

For the first time since the era of Dwight D. Eisenhower -- Democrat and Republican Presidents alike -- the United States no longer has the ability to put a man into space.

China is on the move. And America is unilaterally disarming itself at the worst possible time.

Not entirely fair. I think.

Private enterprise is about to restore our abilities here.

Hey... your website is being blocked by Norton Antivirus for some reason. This happened to Flopping Aces also.

The private industry is still in the learning stages and need financing. I guess that can come from China as well

The private industry is still in the learning stages and need financing. I guess that can come from China as well

Hey Rectum, I thought the financing was coming from my PayPal (Musk/SpaceX) and Amazon (Bezos/Blue Origin) purchases.