Change: The Post-Partisan President Ignores All Pleas for Fiscal Sanity

Excerpt of a letter from 154 House Republicans to the President's 'Debt Commission':

In a depressed economy, the number one priority of government should be to stimulate job growth. With unemployment at nearly 10 percent, Americans cannot afford the burden of a new job killing tax. But this is exactly what a VAT will do. A VAT will increase the cost of goods and services for all Americans, including the lower and middle classes. It will tax our manufacturers, sending even more jobs overseas. And, it will decrease consumption, which will deepen the recession and suppress entrepreneurship. This is exactly what has happened in Europe where increased government spending and taxation has led to consistently high unemployment and suppressed economic activity.

Not that the Obama Democrats care, but Americans have had enough big government in the last 18 months to last a lifetime. A recent Washington Post/ABC News poll illustrates the frustration and anger. 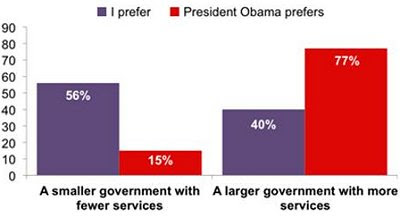 Four months ago, House Republicans sent President Obama a letter urging a bipartisan effort to slash government spending. Cutting the dangerous levels of debt is an urgent necessity and it's not just Republicans saying it: 222 economists have strongly urged the President to embrace fiscal sanity before the entire system unwinds.

President Axelrod never responded. And so the economy continues to hemorrhage, bleeding jobs, wealth and opportunity while the deficit grows to heights never seen before in human history.