Chris Van Hollen, Democrat from the great state of Maryland, says that.. ah, screw it. I'll let the commenters at The Hill respond. 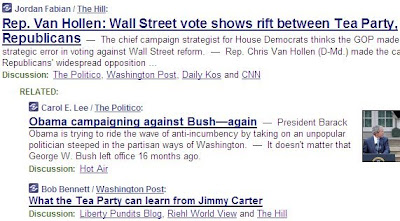 Thank you Van Hollen for clarifying what the tea party thinks. You don't have a clue. We'll explain it in more detail in November.

Van Hollen is a lying weasel like the rest of the Democrats. No Fannie Mae and Freddie Mac crackdown, you bet Republicans should be against it. It was the corrupt scheme of Chris Dodd and Barney Frank and their comrades to give government-backed loans to people who could never pay them back, just for political gain, that triggered this whole mess to begin with. Why don't the Dems want to include Freddie and Fannie in this reform bill, hmmm? (Hint, look at who runs them.) 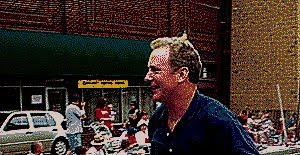 I love it how the Democrats keep spinning this bill as some sort of helping hand to main street Americans when it is just another power grab by Obama and the Democrats so they can control business. The Bill massively expands the powers of the executive branch and limits the ability of parties involved to redress their grievances cased by government moves directed at them. In short this bill is very tyrannical and scary. Tell me again how the Tea Party would support this legislation?

From what I can determine, this bill is, as others have noted, nothing but a sham. The real reform, reform that would have eliminated all of these practices that caused this horrific economic meltdown and devastated the lives of so many Americans, is not going to happen—hands off Freddie and Fannie, Wall Street, the big banks, etc... Where's all that "change" that candidate (now President) Obama and the Democratic candidates continually preached during the campaign? It was all "smoke and mirrors" to entice the American people to vote for them, when they had absolutely no desire to make meaningful changes... What I fear is an even worse financial crisis in a few more years (as various financial commentators have suggested) as these forces that caused the current situation are allowed to continue the same activities that cause the crises. For a real taste of what is likely to happen, I suggest you read Niall Fergueson's article "The Decline of America," in the Feb.-Mar. 2010 edition of Foreign Affairs. As Dr. Fergueson states (I paraphrase), "when decline comes, it will come swiftly."

at 10:35 PM
Email ThisBlogThis!Share to TwitterShare to FacebookShare to Pinterest
Labels: Democrats, extremism