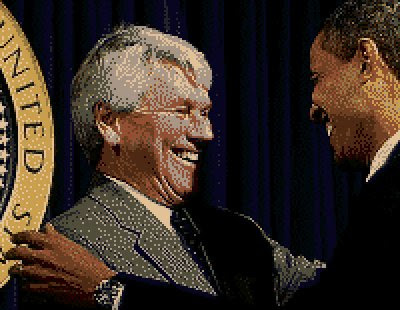 I think that we can probably infer from your timeline that the job offer (Navy Sec.) to Sestak was made sometime between early February, 2009 to, at or around, March 26, 2009- contrary to what the White House and Sestak claimed last Friday that the offer was sometime "last summer". Sestak likely turned down the offer and told them he would stay in the race, so then Obama nominated Mabus. Any offer by the White House to Sestak after March 26 would've been predicated upon Mabus stepping down or being replaced -- possible, but less likely.

A possible related note: I have no idea whether this is relevant to your timeline at this point, but it might be, so I'll throw it out there: The White House Counsel at the time the job offer was made to Sestak was Gregory Craig. Robert Bauer, a former Democrat election lawyer, who wrote the Sestak legal memorandum released last Friday, now holds the position.

Rumors started leaking last summer -- less than half a year on the job -- that the highly experienced Yale Law grad Gregory Craig was already on his way out, and were reported in many media outlets (WaPo, WSJ, etc.). On July, 22, 2009 White House Deputy Chief of Staff Jim Messina denied the rumors, "Sounds like typical Washington parlor games to me. These rumors are wrong." (WaPo), and denied it again to the WSJ a month later... 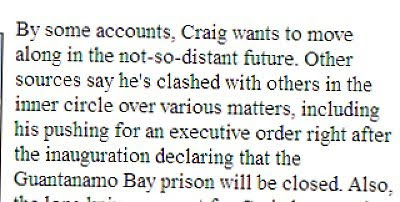 ...In September, Craig told a group of three people, which included the president, that he was thinking of resigning (according to Politico). He then announced his resignation in November, with Politico reporting that, "[H]is decision was unrelated to the difficulties in closing Guantanamo Bay prison or other policy issues." Politico also reported that, "Craig said he could 'think of many ways in hindsight that I could have better served the president' but declined to be more specific."

So, who knows Craig's specific reason for resigning, but inquiring minds might want to know...

...Among other things, Mr. Meltzer played a leading role in the administration’s efforts to close the military prison at Guantanamo Bay, Cuba, and related policies affecting terrorism detainees.

He was also the White House’s main contact with the Justice Department’s powerful Office of Legal Counsel, which evaluates whether proposed policies would be lawful...

Anyone willing to bet that our beloved investigative pro journalists at the "newspaper of record" will diligently research these matters?

No chance in hell that they will investigate.

Thanks for the acknowledgement!! Hope it helps putting this puzzle together...

Yeah, I actually did miss that one- the news happens so fast with these people- blink and you'll miss it. Nice catch!

Update: Judicial Watch released a recent statement, which explains explains more of what was happening, if the report they received is correct:

"...This latest bribery allegation reflects a disturbing pattern by the Obama White House. We still don’t have all the details about involvement of Obama administration officials in the sale of Obama’s former Illinois U.S. Senate seat by Rod Blagojevich. And we still don’t have answers about the charge that Obama Deputy Chief of Staff Jim Messina offered a federal job to Colorado Democratic Senate candidate Andrew Romanoff to keep him out of the Senate race. There is also the report that President Obama tried to push disgruntled White House Counsel Greg Craig out of the White House by offering a federal judgeship on the U.S. Court of Appeals for the D.C. Circuit. And now we have Joe Sestak..."

I still don't know why he was so "disgruntled" if it wasn't about differences over policy and Gitmo.

Sestak is currently the target of a Federal Bureau of Investigation (FBI) probe. The FBI strongly suspects that in 2006, Sestak accepted bribes from United Food and Commercial Workers (UFCW) Union Local 1776 President Wendell Young IV. Young IV is also the target of a wide-ranging FBI probe (he stands accused of bank fraud, mail fraud, and other very serious federal violations). The U.S. Attorney's Office is now involved (suggesting that the probe is in its latter stages).
Sestak is aware that he is under investigation, and is panic-stricken. He hopes (in vain, no doubt) that a deal can be struck: he will bring his floundering Senate bid to a close (and stop making imprudent remarks about the President), and in exchange, the Obama Administration and influential Democrats will intercede on his behalf with the Justice Department.
See Comment#1
http://www.talkingsides.com/blogs/2010/02/19/did-obama-offer-sestak-a-bribe

So Sestak is no stranger to bribes. There should be an investigation. Even if to protect the [p]resident. If the FBI declines to investigate then an ethics probe against Sestak will/should be sought.

Robert Gibbs: White House legal council has looked into the matter and have determined it is NOT a duck. Next question?