It's down to the wire: Chuck DeVore doubles his numbers on RINOs Carly Fiorina and Tom Campbell in California!

Time is running short as Chuck DeVore, a true Constitutional conservative and philosophical descendant of Ronald Reagan, continues to gain momentum in the California race to unseat the horrid Barbara Boxer. 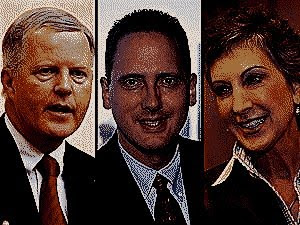 A recent Public Policy Institute of California poll shows that DeVore has doubled his numbers in only two months. Failed HP executive Carly Fiorina and liberal GOP member Tom Campbell are polling at around 24% each while DeVore has pulled within striking distance at 16%.

And there's a huge difference between DeVore and his RINO competitors:

• Tom Campbell is a big government, big tax Nixonian Republican; he's a long-time Californian politician with a history of wishy-washy views and a friend of the tax-and-spenders.

• Carly Fiorina is a "John McCain Republican" who uses the conservative brand to burnish her non-existent credentials. In the past, she's supported amnesty for illegal immigrants, the massive federal bailouts, Cap-and-Trade and uber-liberal Supreme Court Justice Sonia Sotomayor. 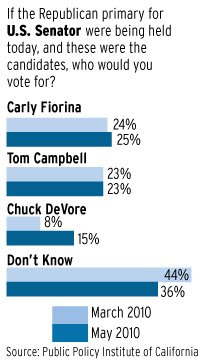 Chuck served as a Reagan White House appointee in the Pentagon from 1986 to 1988. As Special Assistant for Foreign Affairs his duties included working with Congress to advance the President’s foreign and military policy. Chuck’s official travels took him to Asia, Europe, Africa, and Central America. His initiative helped develop the Arrow Anti-Ballistic Missile program.

In 1988 Chuck served as Director of Public Liaison for former Congressman Chris Cox’s first campaign for public office. Through 1990, he served as the Congressman’s Senior Assistant... From 1991 to 1996, Chuck served as a City Commissioner for the City of Irvine. He was Chairman of the city's Community Services Commission.

In 1983, Chuck enlisted in the United States Army Reserve. He earned an ROTC scholarship that allowed him to attend Claremont McKenna College where he graduated with honors with a degree in Strategic Studies in 1985 and was commissioned an officer. He also studied overseas at the American University in Cairo, Egypt. After more than 24 years of active reserve service, Chuck retired from the Army National Guard. He is now a Lieutenant Colonel in the U.S. Army retired Reserve. A graduate of the U.S. Army’s Command and General Staff College, his awards include the Meritorious Service Medal, the Army Commendation Medal with bronze oak leaf cluster, and others.

Since age 19, Chuck has been an active volunteer for the Republican Party, serving in the leadership of several organizations. He was elected to the Orange County Republican Party Central Committee in 1992 and was reelected four times. Chuck was Chairman of the Ethics Committee.

Chuck DeVore is the kind of man we need representing California.

Donate a couple of bucks now -- the stakes are too high for our children and grandchildren. It's not an overstatement to say that the Republic hangs in the balance.

at 9:03 PM
Email ThisBlogThis!Share to TwitterShare to FacebookShare to Pinterest
Labels: Protecting America