Illinois Melts Down: the Inevitable Result of Unchecked Democrat Rule

'Illinois lawmakers were in disarray Thursday as they groped for stopgap measures to address a $13 billion deficit equaling nearly half of the state's general-fund revenue... "We are lucky in that we still can borrow," Mr. Trotter said, noting that lawmakers responded to rating-agency concerns last month by reducing pension benefits and lifting the retirement age for new state employees to 67 from 60. Lawmakers also are weighing the idea of postponing pension payments... '

State will have $5.5 billion in unpaid bills by end of June

'Meanwhile, the state still owes billions of dollars to hospitals, universities, social-service providers and others. Mr. Hynes said the state's backlog of unpaid bills probably will exceed $5.5 billion at the end of June... "Eventually, many providers of essential state services may be unable to continue their operations at current levels, and those vulnerable segments of the population to whom they provide services will suffer the consequences," [Illinois Comptroller Daniel Hynes] wrote.'

'Illinois tax rates are the most talked about issue on the campaign trail and in the statehouse, as Gov. Pat Quinn pushes for a 33 percent income tax increase... Illinois ranks fifth [in the U.S.] with more than $116 billion in debt, translating to about $9,000 per-capita [as of 2007]."

'There apparently will be no vouchers for the children in Chicago's worst schools. The Illinois House refused this week to pass a voucher bill, which would the first of its kind in this state... State Sen. James Meeks (D-Chicago) [introduced a] voucher bill would have given children in more than 50 of the worst-performing elementary schools in Chicago an opportunity to attend private schools by giving them $3,300 vouchers.'

'"I think everyone is aware of our situation," 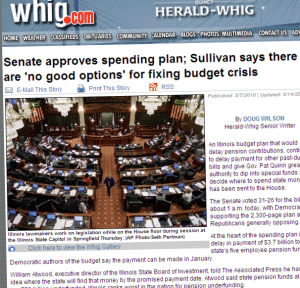 Southern Illinois University President Glenn Poshard told a Senate committee earlier Thursday. "We're owed right now, a number of public universities in the state, over $700 million by the comptroller. We simply do not have the ability to make up that money in a short period of time. So we need this borrowing to keep our universities working and to pay our people." ...The state owes its public universities more $700 million in appropriations for the current school year. The University of Illinois alone is owed $386 million and SIU is owed $104 million for its two campuses... The money isn't being paid because of a $13 billion state budget deficit and it isn't clear when that might change... "Here we are with a ticking time bomb once again and what's the solution? Borrow more money," Sen. Matt Murphy, a Palatine Republican, told colleagues before the vote. "We already owe more money per capita than any other state in the nation. Here's another effort to farm out our debt."'

'For 35 years, frail senior citizens in southern Illinois could turn to the Shawnee Development Council for help cleaning the house, buying groceries or any of the chores that make the difference between living at home or moving to an institution.

No more. The council shut down the program Thursday because of a budget crisis created by the state of Illinois' failure to pay its bills.

Paralyzed by the worst deficit in its history, the state has fallen months behind in paying what it owes to businesses and organizations, pushing some of them to the edge of bankruptcy.

Illinois isn't bothering with the formality of issuing IOUs, as California did last year. It simply doesn't pay... Illinois' deadbeat reputation has created some embarrassing situations.

A supplier refused to sell bullets to the Department of Corrections unless it got paid in advance. Legislators have gotten eviction notices for their district offices because the state wasn't paying rent. One legislator said he had to use campaign funds to pay the telephone bill after service was cut off at his office.

...The practice of simply putting off payments became commonplace under ex-Gov. Rod Blagojevich... The strategy also may have been helped along by Illinois' "anything goes" political culture...

...Some schools have tried to shame Illinois into paying by posting signs announcing how much the state owes. The website IllinoisIsBroke.com details the state's financial mess...'

* * * * * * * * * * * * * * * * * *
Gee, Madge, aren't these Democrat-controlled Utopias cool? But don't worry, I trust President Obama and his Chicago-slash-Beltway Machine completely to take better care of the United States economy. The whole Daley-Blago-Jarrett-Rezko connection to the utter destruction of Illinois is tenuous, I'm sure.