Gaza 'Humanitarian' Flotilla: a Ruse for a 'Martyrdom Operation'

No summer cruise off the coast of Gaza is complete without killing or kidnapping a few Jews, don'tcha know? 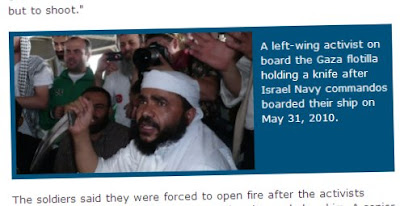 The Gaza 'humanitarian' flotilla was a ruse. Haaretz has the inside story and MEMRI has the video proof, taken before the violence went down. Put simply, some of the hard-core extremists were seeking martyrdom and hoping to kill a few Jews on their way to the afterlife.

Gaza-Based Yemeni Professor Abd Al-Fatah Nu'man: As Much As the Heroes on the Flotilla Want to Reach Gaza, the Option of Martyrdom Is More Desirable to Them – Al-Aqsa TV, May 28, 2010

Yesterday, I was following the news agencies, and they reported the threats of the Zionists to detain the convoy and to prevent it from reaching Gaza. On the other side, there are people armed with faith and resolve, who chant – even while hearing the threats: 'Khaybar, Khaybar, oh Jews, the army of Muhammad will return.' A woman stood on the deck, and said: "We await one of two good things – to achieve martyrdom or to reach the shore of Gaza." 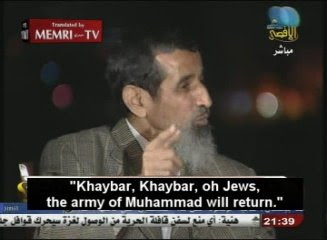 "This scent is a message to the Islamic nation worldwide: Islam is coming, and Gaza is the spearhead that sets the nation in motion." 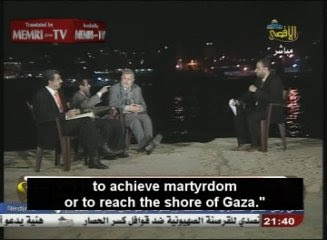 "Yesterday, the commander of the fleet said: 'We will not allow the Zionists to come near us, and we will wage resistance against them.' With what will they wage resistance? With their fingernails. These are people who wish to be martyred for the sake of Allah. As much as they want to reach Gaza, the other option is more desirable to them. 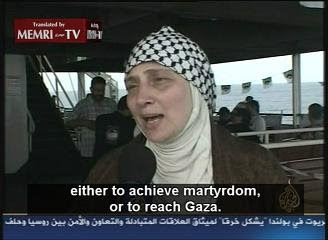 "We pray to Allah that they be awarded both good things: That they reach the shore of Gaza safe and sound, and that they be granted martyrdom, along with us, on the walls of the Al-Aqsa Mosque – as conquerors."

Oh, and in related news, Al-Jazeera helpfully explains that the convoys should be used to bring weapons to the Hamas terrorists infesting Gaza. 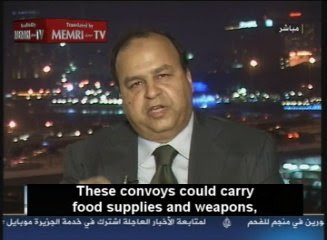 The siege that Israel is imposing... It is necessary to provide Gaza not only with food, water, and building supplies, but also with weapons. Weapons must be provided, because these are weapons of revolutionaries, and aid must be provided to the Gaza Strip... 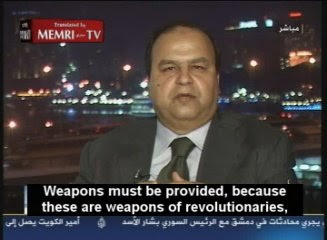 ...These aid campaigns should not be restricted to food and water. The [ships] could also include returning refugees and weapons for the Palestinian revolutionaries.

I, for one, am glad they clarified the real mission of the 'humanitarian' flotilla.

I think it is always fine policy to help Jihadist martyrs find their way to Alah. ESPECIALLY BEFORE they can take anyone with them.

Aaron Klein has some additional info about some of the familiar radicals behind the Gaza flotilla (these people are like cockroaches...)

"The group behind the Gaza flotilla that engaged in deadly clashes with Israeli commandos today counts among its top supporters the friends and associates of President Barack Obama, namely the founders of the Weather Underground terrorist organization, William Ayers and Bernardine Dohrn, as well as Jodie Evans, the leader of the radical activist organization Code Pink...

...The flotilla was organized by the Free Gaza Movement, a coalition of leftist human rights activists and pro-Palestinian groups engaged in attempts to break a blockade imposed by Israel on the Hamas-controlled Gaza Strip.

Ayers, Dohrn and Evans' Code Pink have led several recent Free Gaza Movement initiatives, including attempted marches into the Gaza Strip. Dorhn was in the Middle East just last month on behalf of the movement...

...In January, WND reported Ayers, Dohrn and Evans were involved in provoking chaos on the streets of Egypt in an attempt to enter Gaza with the Free Gaza Movement to join in solidarity with the territory's population and leadership..."