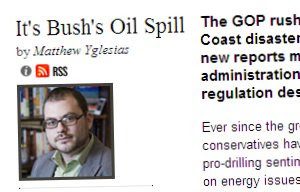 Matthew Yglesias, who has held the undisputed title of World's Dumbest Blogger since 2004, unleashed another hilarious literary excretion on Friday.

Yggie Pop -- that's the nickname he prefers -- uses the favorite oh-so-creative, who'd-have-thought-of-it tactic of the Left. See if you can guess which option he called for out of the Left's tired playbook as he tried to reassign blame for the tragic BP-Transocean oil rig explosion and spill:

Choose Your Play from the Left's Playbook
A) Race Card (Al Sharpton optional)
B) Blame Bush
C) It's the Tea-Baggers' Fault
D) Because the U.S. supports Israel's genocidal apartheid
E) Because talk radio and Fox News are controlling people's minds kind of like The Matrix

Ready? As 99% of you surmised, the correct answer is 'B'. For the rest, i.e., you Democrats reading this, my personal position is that we should blame the Fillmore administration. 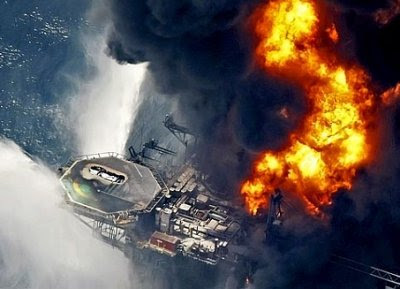 In Obama's Katrina -- An Illustrated Timeline, I documented the activities of the administration in relation to the tragic explosion and oil spill.

Before there was any substantial response (other than that of the U.S. Coast Guard and sending in lawyers to New Orleans), the President spent almost all of his time on:

• Campaigning for the financial overhaul bill to give the federal government even more regulatory power over our lives, while ignoring Fannie Mae and Freddie Mac
• Blasting Arizona's enforcement of federal immigration law with its onerous demands for documentation in situations where police have engaged suspects
• Using his radio address to rally disaffected Hispanics and Blacks to his big government cause
• Meeting with the Rev. Bill Graham for photo ops during a vacation to the Smokies
• Filming racially divisive video spots for Organizing for America
• Golf

Put simply, the lack of serious White House response points to, at best, negligence and most likely sheer, unmitigated incompetence. 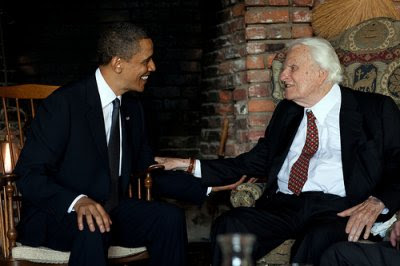 For a man who decries 'finger-pointing', the President has yet to take the blame for any of his actions. And his useful idiots in the press, new media and old, are all too happy to oblige by playing cards that have been worn thin through overuse.

at 11:28 AM
Email ThisBlogThis!Share to TwitterShare to FacebookShare to Pinterest
Labels: Democrats, MSM, Obama