The unparalleled brilliance of Eric Holder: Al Qaeda bomber who killed 166 and planned World Cup attack had been released from U.S. custody in 2009

Next month's soccer World Cup in South Africa was the target of an Al Qaeda attack according to Iraqi security personnel. The mastermind was reportedly a man who had already killed 166 Iraqis in various bombings -- after his release by the Obama administration last year. 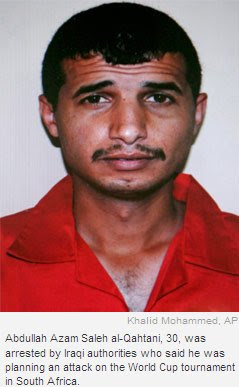 The 30-year-old Saudi national [Qahtani], who was arrested two weeks ago, had been in contact with Al-Qaeda number two Ayman al-Zawahiri... Qahtani, who adopted the nom de guerre "Sinan al-Saudi," held a degree in business administration and also graduated from King Fahd Security College with the rank of lieutenant.

He entered Iraq in 2004, shortly after the US-led invasion to oust Saddam Hussein, and was involved in operations in the towns of Al-Qaim and Husayba near Iraq's border with Syria.

According to Atta, Qahtani was apprehended by the US military in 2007 under the false name Muzawar al-Shammari, and was released last year.

More recently, he participated in the planning of a series of co-ordinated attacks against Baghdad hotels in January which killed 36 people, and in the organisation of five vehicle-borne bombs that killed 127 people in the capital in December.

...[Also captured was] Algerian national Tareq Hassel Abdul Qader was the network's military chief for Karkh, Baghdad's western district... Qader also helped plan several attacks in Iraq, but did not say whether he was involved in the organisation of the potential World Cup attack.

The World Cup is anticipated to draw nearly 400,000 foreign fans, so it makes an Olympic-sized target for terrorists.

Curiously, the few American sources reporting this story, including AOL News, the Associated Press and MSNBC, somehow failed to note that the terrorist had been released from U.S. custody in 2009.

Thanks to the outstanding leadership of President Barack Obama and Attorney General Eric Holder, the line distinguishing warfare from law enforcement has been thoroughly eradicated.   The inevitable outcome -- demonstrated by this, the latest in a series of close calls -- is guaranteed to be toxic to the civil society.

I have never felt safer.

Give the man a Nobel prize.

No wonder he couldn't say the words "Radical Islam". He's in complete denial about the source of terrorism. I'm so pissed at the people who voted for Obama. Everyone he has appointed is either ignorant, stupid, immoral, treasonous, or all of the above. Thank God for the Tea Party!

The National Police Bheki Cele, said last week that he was unaware of the threat to the security of the World Cup, the biggest sporting event in the world, starting June 11.
sd card

I hope that nobody forgets to mirandize Eric Holder when he's apprehended.