The First Hit Is Always Free: The Obama Democrats Intentionally Expand the Culture of Dependency

40 million individuals in the U.S. now receive food stamps, the highest figure in American history. The cost: a startling $73 billion a year. Fans of the welfare state and Democrats -- but I repeat myself -- claim that the economy is to blame. While that's no doubt a factor, the uncomfortable truth is that the Obama administration seems bound and determined to get as many households as possible addicted to food stamps.

"The number of food stamp recipients has more than doubled since 2000, and the cost of the program has more than tripled," said Chris Edwards, an expert on federal and state tax issues at the libertarian Cato Institute...

Though no one quibbles about the need for more forms of assistance during times of high unemployment, Edwards fears there is more going on here, that there is an effort to just keep expanding such programs... Some government figures show that only 10 million people have a serious problem with hunger, Edwards said... "The number of people on food stamps is four times higher than the number of people with a serious hunger problem..."

The scope of the abuse of the welfare state is shocking, especially when you consider that it's tacitly encouraged by the federal government.

Despite relatively tiny levels of inflation, the administration continues to dramatically increase the income thresholds necessary to meet the assistance minimums. 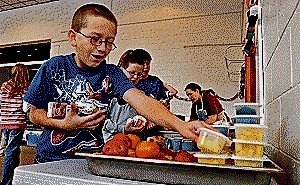 My next door neighbor has 3 kids, receives free housing (voucher), heat assistance, free child care, food stamps, free bus card and a free cell phone w/70 minutes of free phone time each month. She claimed she ran her own 'small business' and was able to receive over $4000 back on her income taxes. Taxes she has never paid. Every month she sells $300 of her food stamps...

...The situation is MUCH worse –there is absolutely no deduction in the food stamp program for the fact the school age children qualify for the separate ‘free lunch’ programs — which include breakfast too. And abuse of that is rampant –my wife is a 20yr public school teacher and I get outrageous scoop [sic] all the time... Additionally, yet another federal program pays for the school cafeterias (only in certain neighborhoods) to open in the *summertime* and feed all comers in the ‘community’ — not just school age kids either... Its disgusting — no effort is made whatsoever to detect overlapping benefits...

In fact, the fraud associated with the spread of food stamps appears to be growing with the help of organized crime.

They buy the items w/ EBT, typically expensive single items. (Think fungible gallon of milk). Then they bring them back w/ no receipt later that same day, typically when there is a different front end manager or store manager on duty.

FYI. I have been in groc. business and my wife is in groc. mgmt.

The people running these scams use social engineering attacks.
1. Loss prevention interactions are law-suit bait.
2. Returns w/o receipt are incredibly hard to deny w/o also being lawsuit bait.
They will know more about your corporation and it’s business partners than any employee in the place. They know which vendors have cash in their trucks (COD accounts or pop vending machines, etc).
They will: 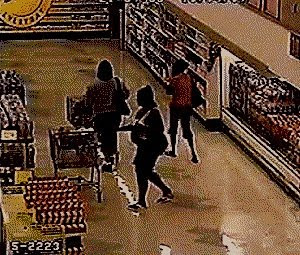 They will likely carpool or at least arrange to arrive in ‘packs’. While people are making their case for product return at the service desk, there will be several ’shoplifters’, some obvious, some not so much working the store. The management team will be overwhelmed (DOS attack) with team members calling to report the shoplifters. A vendor will very likely be trying to deliver, so the back door needs to be open. Manager will have to either go after the shoplifters taking $250 in roasts and steak out the door while they deal with the obvious fraudulent product return or they will (almost always) authorize the fraudulent return or delegate authority downward to do so. Police will not investigate shoplifting after the fact even with an outside eyewitness and surveillance video showing both the taking and the license plate of the car they left in. The more fraudulent the people are, the louder and more aggressive they will be at the customer service desk. They WILL KNOW the managers name and district managers name and threaten to call them at home on the weekend to discuss this “OUTRAGE of not getting cash back when they paid cash earlier in the day and don’t need the product now that their family can’t visit after all”.

This goes on every day in every grocery store in America and is well documented via surveillance video. Pay a little extra attention from now on and see how much of this you can now personally witness.

The real outrage for these comments is that our service members are paid so poorly that if there is a family involved, they almost certainly need WIC & foodstamps.

In addition, some colleges and universities seem to aggressively encourage the use of food stamps by students. 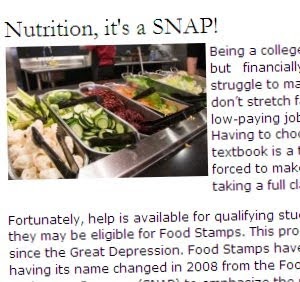 About 20,000 people sign up for food stamps every day, and college students across the country are the newest demographic being encouraged to enlist...

Portland State University devotes a page on its Web site to explaining the ease with which students can receive benefits, along with instructions on how to apply. The school says food stamps are not charity but rather a benefit all honest taxpaying citizens can afford...

The U.S. Department of Agriculture renamed food stamps the Supplemental Nutrition and Assistance Program (SNAP) in 2008, instituted electronic debit cards instead of coupons, and began an aggressive push to expand eligibility.

In other words, rampant fraud and abuse of the system is implicitly encouraged by the administration and its accomplices.

It's gotten so bad that Salon Magazine -- no right-wing outlet -- devoted significant coverage to the purchase of high-end food items (organic salmon, for instance) by recipients of food stamps.

...recent changes made to the program as part of last year's stimulus package, which relaxed the restrictions on able-bodied adults without dependents to collect food stamps, have made some young singles around the country eligible for the first time. 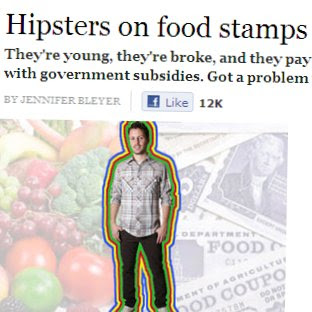 ..."The use has gone way up in the last six months," said Eric Wilcox, a cashier who has worked at Rainbow Grocery in San Francisco for 10 years. "We're seeing a lot more young people in their 20s purchasing organic food with food stamp cards. I wouldn't say it's limited to hipster people, but I'm certainly surprised to see them with cards."...

...At Magida's brick row house in Baltimore, she and Mak minced garlic while observing that one of the upsides of unemployment was having plenty of time to cook elaborate meals, and that among their friends, they had let go of any bad feelings about how their food was procured... Savory aromas wafted through the kitchen as a table was set with a heaping plate of Thai yellow curry with coconut milk and lemongrass, Chinese gourd sautéed in hot chile sauce and sweet clementine juice, all of it courtesy of government assistance.

The message to many workers is apparent: quit your job and start buying organic! Start living large -- just let someone else pay the bills! Why work?

Barack Obama is the neutron bomb of fiscal policy. Day in and day out, he obliterates the private economy -- and only the empty shops and office buildings remain.

Interesting map identifying high usage counties across the U.S. All of the dark blue counties in South Dakota are Native American reservations. And they generally vote 90+% Dem.