Danish News: Jews being hunted down in Copenhagen in retaliation for Gaza flotilla violence

TAB points us to a chilling news report from Denmark's Ekstra Bladet. The translation may be imperfect, but you'll grok the genocidal picture. 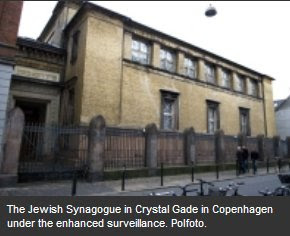 Jews should not go outside wearing a skullcap in the Muslim neighborhood of Nørrebro... such is the recommendation of several Jewish organizations. Due to the violence related to relief ships, which were on their way to Gaza, could trigger confrontations between Jews and Arabs in Copenhagen.

16 people were reported killed this morning when the Israeli military attacked six emergency vessels up bound for Gaza. This could add fuel to the fire and trigger direct, violent conflicts between Jews and Arabs in Copenhagen. The situation in the capital is now so tense that one should avoid wearing a student- or skullcap if you are a Jew and travel through Nørrebro in Copenhagen.

The risk of being attacked is simply so great that the chairman of Mosaic Church, Finn Schwarz, advises its members to remove religious headgear when they travel in Nørrebro, writes news agency Newspaq... He is sorry to see that Danish Jews will have to take precautions because there is a group of Danes with different ethnic backgrounds who have a hateful view of Jews.

Copenhagen else for decades had a reputation for being one of the most safe and tolerant places for the large and highly respected Jewish minority. But it has now become necessary to have a large security force guard the synagogue on Crystal Gade.

Danish Jews must, of course, be able to walk the streets without being attacked or harassed, like any other citizen is entitled. Danes do not attack people because of their ethnic or religious background. For a small group who do not understand what is right or wrong... On the Facebook group called 'F***ing Jews', 160 people have indicated that they 'like'.

Countdown to an international outcry over this Nazi-like behavior against innocent in: 3... 2... never.

at 3:15 PM
Email ThisBlogThis!Share to TwitterShare to FacebookShare to Pinterest
Labels: extremism, War

Time for the JDDF to form up.

lol, "could trigger". and a meteor "could" fall through my roof. what's with the sensationalism?

Gee, this looks like a real 'humanitarian' to me.

This was a suicide mission, oops, I mean 'martyrdom operation'.

Kinda like the Somali pirates capped by Navy Seals.

Or were the Somalis just heavily armed aid workers, too?

I am swedish and can read danish fluently. This has happened according to the article: jewish people are advised by their rabbis not to wear kippas. No one has been hunted down. Stop your warmongering now!

Perhaps you could explain this March 2010 news story from the same neighborhood?

In the Copenhagen township of Nørrebro that has been solidly in Muslim hands for a long time, Jews must hide their faith in order to avoid persecution.

Yellow stars get stuck to the backs of Norwegian schoolchildren, and the teachers don’t intervene. In the “enriched” Swedish town of Malmö, many Jewish families have already fled (PI reported).

In all of Scandinavia, the persecution of Jews by “persons from the Near East” has
increased enormously. The Frankfurter Rundschau reports:

The attacks escalated in the previous year, when 200 Jewish demonstrators held rallies for peace and compassion for the civilian victims of both sides but were hounded out of the place by an even larger group of Palestinian counter-demonstrators with rocks, bottles and Molotov cocktails

Teachers and parents reported on Norwegian TV that the class instruction about the Holocaust was boycotted and statements like “The Jews were behind 9/11″ went unanswered. When one pupil complained that he was mortally threatened because he was a “Jewish pig,” the teacher dismissed him with the statement that these things could happen to anyone.

Okaaaay. So, we are daily insulted with “Jewish pigs,” mortally threatened, and “halal-”murdered…

The non-intervening teachers are simply fostering their own festering anti-Jewish sentiments and building themselves up in their own conceits with “acceptance of cultural distinctions” and their “tolerance.”

It’s better as a secret Jew hater to wash one’s hands in the innocence of Political Correctness, and let the Jews accuse “persons from the Near East” as fair game.

What have you done to stop the Jew-hatred in your country?

I am sorry to disappoint you but Jews are recongisable with or without their skullcaps. I do not live in Denmark, neither am I a Muslim but I can tell a Jew a mile off and so can many others. It is only Jews who believe that look like other Caucasian, but you do have very different features!

Perhaps you could start by pointing out all of the Jewish Hollywood actors who look the part.

Sometimes I fear for the future of the world. But then I remember that Darwin was a very wise man and people as stupid as you are tend to walk in front of cement trucks while texting.

The part of "international law" that I read and understand says that if a vessel is attempting to run a blockade, and refuses to stop, they're fair game.

The "peace activists" should thank Gaia that the vessels were not sunk.

Jews would love that wouldn't that? The need to feel forever victimised and persecuted. Do you people ever feel any sense of embarassment from your eternal sense of victimhood. I have never known another race (and yes you are a race) who seems to revel so completely in a sense of oppression. Most people consider this weak, but evidently the Jews see this as some sort of virtue.

@directorblue - Only a jew believes that he looks like other Caucasians. All of the people you mention look like Jews even Scarlett Johansson and Natalie Portman in particular. Another thing noticeable about your tribe is that once you all reach a certain age, you start to look more and more Jewish - so the Anglo-Saxon traits you seem to yearn for - do not last forever I'm afraid - Most Jewish men have sloped foreheads, a larger lower lip, the nose (unless altered by plastic surgery), hooded eyelids - try and tell me that the model Gizelle does not look like a jew or even the British MP Miliband brothers- with their tight dark hair. Jews are deluded. You really believe that you look like other white people. Good luck with that!

I think you were born too late -- you could have done the selektion at the gates of Auschwitz!