Courtesy of The Los Angeles Times, the dialogue between Joe Sestak and David Gregory on Sunday's Meet the Depressed is fascinating indeed.

MR. GREGORY: What, what job were you offered to stay out of a primary race by the administration?

REP. SESTAK: It's interesting. I was asked a question about something that....

MR. GREGORY: All right, but you've campaigned on transparency. It's part of the politics. You talked about standing up to the White House when they'd fielded a candidate--made a deal with Arlen Specter. So isn't it in the--in the spirit of transparency, were you offered a job by the administration? And what was it? ... 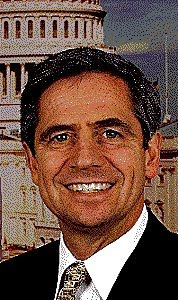 REP. SESTAK: I felt I needed to answer that question honestly because I was personally accountable for my role in the matter.

REP. SESTAK: And--but anybody else has to decide for themselves what to say upon their role, and that's their responsibility.

MR. GREGORY: Yes or no, straightforward question. Were you, were you offered a job, and what was the job?

REP. SESTAK: I was offered a job, and I answered that...

MR. GREGORY: You said no, you wouldn't take the job. Was it the secretary of the Navy?

MR. GREGORY: Was it the secretary of the Navy job?

REP. SESTAK: Anything that go--goes beyond that is others--for others to talk about.

Robert Gibbs offered his usual stalwart defense on the Sunday talk circuit, which consisted of equal parts deflection and incoherence.

Today, however, even the official public relations newsletter of the DNC -- The Washington Compost -- raised the white flag. 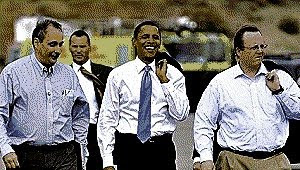 ...It would be awfully ham-handed if, as Mr. Sestak claims, an administration official presented the situation as an explicit quid pro quo: Don't challenge Mr. Specter and the Navy (or another job) is yours. Would it be illegal? Mr. Specter said so, but ethics laws do not seem designed for this circumstance. Ordinarily, bribery takes place in the opposite direction...

Still, the White House position that everyone should just trust it and go away is unacceptable from any administration; it is especially hypocritical coming from this one. "I'm not going to get further into what the conversations were," Mr. Gibbs said Sunday. "People that have looked into them assure me that they weren't inappropriate in any way." This response would hardly have satisfied those who were upset during the previous administration about the firing of U.S. attorneys. If there was nothing improper, why not all that sunlight Mr. Obama promised? 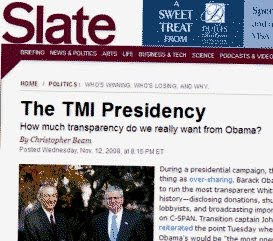 The most. Transparent. Administration. Evah! And to think that the geniuses at Slate Magazine were wondering if the Obama administration would be too transparent!

When the history books are written, I can assure you that this incident will be among the least of our concerns.

And I have only one more question:


* What would Kwame Kilpatrick do?

"MR. GREGORY: You said no, you wouldn't take the job. Was it the secretary of the Navy?

How do we know that highlights shouldn't go like this:

"MR. GREGORY: You said no, you wouldn't take the job. Was it the secretary of the Navy?

Sometimes, a person is asked two questions, and focusses his answer only on the first one, ignoring the second question.

Why should the former be highlighted? Because of the words "And I also said..." which follow "you said you wouldn't take the job."

Why should the latter be highlighed? Because he never refuted the charge that he was offered the Navy job.

Needs more analysis than this...

Oh, was that a defense of Sestak or Obama? Heck no! I'm sure they're guilty as sin. About something.