One Answer to the Public Sector Unions: Outsourcing 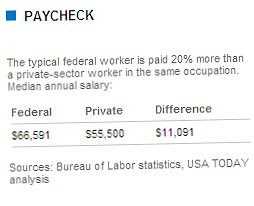 Taxpayers are growing angrier and angrier at the outsized salaries, pensions and benefits negotiated by public sector unions. It is commonplace to have retirees in California receive guaranteed six-figure salaries in retirement with cost-of-living increases. Former school administrators in New Jersey can expect to earn $200,000+ annually for the rest of their lives.

Study after study shows that for equivalent jobs, public sector wages are far more lucrative on average than the private sector. And pensions -- retirement benefits overall -- are leaps and bounds richer than their private equivalents. These disparities are due to union monopolies that work directly against the taxpayer and reward politicians who "go along to get along" during contract negotiations. Big government Democrats reward unions, which turn around and contribute heavily to Democrats.

In Europe, outsourcing of some public sector jobs has become commonplace to break this vicious and deadly cycle.

In the UK – viewed as one of the economies hit hardest by the crisis thanks to an over-reliance on financial services, and facing a budget deficit of over £175bn – outsourcing contracts already account for around 13% of government spending; the UK is widely viewed as a ‘world leader’ in public-sector outsourcing. Since the production last year by former outsourcing luminary DeAnne Julius of a somewhat controversial ministerial-level report heavily backing increased outsourcing, a drive towards efficiency via outsourcing has become entrenched policy.

With state and local economies flat on their backs, administrators in the U.S. are right to examine ways to force efficiencies out of bloated, monopolistic contracts.

[In the U.S.] the picture is less cut-and-dried, as a traditional distaste for public-sector outsourcing (reinforced by heavy pressure from organized labor to keep jobs under state control and within national boundaries) runs up against the overwhelming need to bring public finances back under some semblance of control. Muddying the water still further is the conflation in the minds of many both within and outside government of “outsourcing” with “offshore outsourcing”...

Indeed, outsourcing does not necessarily imply offshoring. Outsourcing can translate to near-sourcing, e.g., a situation where Ohio contracts with a private organization in West Virginia to handle call center operations.

While fire-fighting remains the order of the day for many state governments, there is a growing belief that the downturn might have tipped the scales in terms of ushering in a new (and, in many eyes, long-overdue) wave of public sector transformation)...

I commend Moore and other government executives who use private sector companies to compete on price, quality and other traditional measures unheard of by organizations like the AFT, the NEA and the SEIU.

Call Center Philippines is the best place to outsource, good quality and you can really save lots of money.

It was not Wall Street that caused the collapse, the Union boy, he was your friend Barney Frank, who pushed Fannie and Freddy to restore social parasites who had no job, no income and without any hope of repayment of a mortgage. Why wait 50 to retire, boy Union. Has your union thugs negotiate negotiate a retirement age of 40.
digital camera memory cards