Is there a true 'nuclear option' to seal the Gulf spill?

Word has it that the Soviets used tactical nuclear weapons to seal similar leaks back in the day. 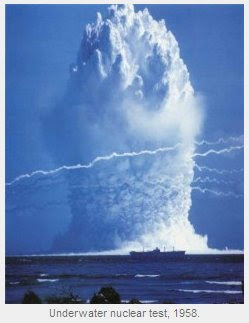 Komsomoloskaya Pravda, the best-selling Russian daily, reports that in Soviet times such leaks were plugged with controlled nuclear blasts underground. The idea is simple, KP writes: 'the underground explosion moves the rock, presses on it, and, in essence, squeezes the well’s channel.'

Yes! It’s so simple, in fact, that the Soviet Union, a major oil exporter, used this method five times to deal with petrocalamities. The first happened in Uzbekistan, on September 30, 1966 with a blast 1.5 times the strength of the Hiroshima bomb and at a depth of 1.5 kilometers. KP also notes that subterranean nuclear blasts were used as much as 169 times in the Soviet Union to accomplish fairly mundane tasks like creating underground storage spaces for gas or building canals.

These kinds of surgical strikes to shut off underground leaks, however, were carried out only five times, with the last one occuring in 1979. And there was only one misfire, near Kharkov, Ukraine, where a nuclear blast was unable to stanch a gas leak.

Happily, with a track record like that, "the chances of failure in the Gulf of Mexico are 20%," KP writes. "The Americans could certainly risk it."

KP must be unfamiliar with the American strain of Leftist moonbats, who would sooner reduce an entire continent to a subsistence-level existence than allow the use of modern technologies like, say, DDT. As for nukes? The Leftists would rather nuke an American city than risk the life of an American Eel.

As for nukes? The Leftists would rather nuke an American city than risk the life of an American Eel.

Very interesting that this has been done before...and more than once. Your commentary is spot-on, Doug.

Would not a large charge of conventional explosives accomplish the same result? Or perhaps dropping Michael Moore over the wayward well?

Do you think the ell thing was maybe a bit too far?

I would like to see some proof, other than Soviet News, which is about as reliable as US news these days.

But surely if it were really done, someone must have some followup science ... It does sound plausible. I assume the nuke was used because it was easier to get it into postilion than conventional explosives.

What I am wondering is why haven't they just replaced the BOP, which is what is done on land ...

It appears to me that all of the mentioned incidents were on dry land...

Lots of things that would be straightforward - if not easy - on dry land take on a whole new dimension of difficulty when attempted beneath nearly mile of water...

Wow. Can you imagine the amount of oil that must be there in order to develop the pressure that's indicated by the constant flow? Of course, you also have that mile of water pressing down on the ocean floor.... If you take out all that oil...will the ocean floor sink into the void? does it just fill with sea water?? questions I never thought about before...!!

Maybe using the same idea, requiring a higher yield of course, could stop the the BS flow out of Washington.

Why does the media always measure the force of atomic munitions in "Hiroshimas"? 1.5 times the power of Little Boy would be about 20KT, and that is not a tactical nuke: is a city killing Stratigic kinda bomb. I was in favor of nuking it last month when Ace of Spades related the old Soviet technique, but i am not entirely sane.

Suek, the pressure at 5500 ft in water is aprx 2600 PSI. It is water moving into the well that is displacing the oil, the water being heavier than the oil. The incoming water is forcing the oil out.

Not being familiar with the geological survey, an explosion could have the opposite affect. In lieu of sealing the well, it could merely blow the top off of it and divulge its' contents all at once.

Taking into account that the drilled hole is over 1000ft past the floor of the Continental Shelf, it may be a safe bet. However, there is plenty of frozen hydrate in the well. If enough heat were applied with an explosion, the expansion of the frozen gas alone could force a new opening, not to mention a counter explosion.

As I posted, the million dollar question is, why were they drilling so deep? The answer, because those are the only leases socialist environuts will approve. They approve them based on the idea it will be too costly to drill, and that we do not have the technology, to go and get it.

There are much shallower, safer areas, to drill that will actually reduce the cost of oil, but environuts have made sure that we cannot drill there.

They want us back in unpowered caves throwing rocks at each other. But, do not worry, the Social Elites will come down from their mansions to ensure everyone has an equal number of rocks. Can't have anyone planning ahead, taking responsibility for their own defence, now can we :-)

Unfortunately at that depth and pressure, a conventional explosive might not work. Every explosive like TNT or C4 has a finite blast pressure. If the surrounding pressure is as great or greater, then the explosive effect will be only a few feet, if it can be exploded at all. Remember, we're talking about pressures like on the surface of Jupiter. A small tactical nuclear bomb, detonated thousands of feet down the well in the same or parallel shaft would permanently collapse the well and not be of any danger to the environment. The Russians have plenty of experience doing exactly that. Just google "gulf nuclear option" and read.