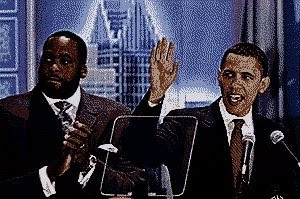 "No one is more qualified to deal with these kinds of crimes than my good friend Kwame," the President said in a prepared statement delivered at the White House. "And his efforts will be just as effective as my order to send 1,200 National Guardsman to the border area."

Actually I made up the part about Kilpatrick -- but not the National Guard. Sending in a few troops -- what is that, one soldier per mile? -- is as sincere a security measure as the legendary "virtual fence." 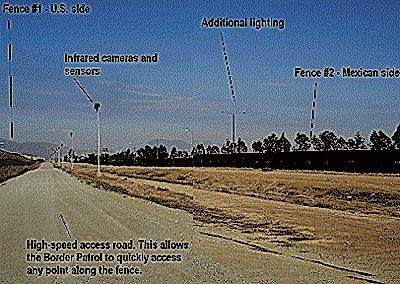 The most glaring sign that President Obama’s announcement of border funding and National Guard troops is one big, phony charade? He apparently didn’t even bother to let the governor of besieged Arizona, Gov. Jan Brewer, know about it...

...[the Bush White House also used] border security as a campaign ploy and performed Get Tough Theater only to flake out... The only thing worse than open-borders Obama exploiting our illegal immigration woes is open-borders Johnny-come-lately John McCain continuing to do the same.

...Until politicians with proven integrity and commitment to securing this country against invasion step into the leadership vacuum, Arizona’s DIY policy on border security is the only trustworthy one: Do It Yourself.

The one "shovel-ready" Stimulus project that 90% of Americans support -- a 25-foot high, 3-foot wide border fence made of steel-reinforced concrete -- was somehow missed in the President's comprehensive plan.

Along with the actual "security" part of border security.

Personally, I'm in favor of a double 10 ft chain link fence, to be used as an animal preserve, and to be stocked with various large felines and/or other large wild carnivores that might need protection...

Is Obama-Speak also going to restore the funds he cut from the border fence construction?

Bush sent about 6000 troops to the border.

Good idea, but too susceptible with poisoned meat.

Anything short of King Kong will have serious trouble breaching 'em.

Stop illegal immigration and drug trafficking in a week. Just put out a call for armed volunteers to guard the border.

Something funny that came to me via email:

I'm planning to move my family and extended family into Mexico for my health, and I would like to ask you to assist me.

We're planning to simply walk across the border from the U.S. into Mexico, and we'll need your help to make a few arrangements.

We plan to skip all the legal stuff like visas, passports, immigration quotas and laws.

I'm sure they handle those things the same way you do here. So, would you mind telling your buddy, President Calderon, that I'm on my way over?

Please let him know that I will be expecting the following:

2. English-speaking government bureaucrats for all services I might need, whether I use them or not.

4. I want my grandkids to be taught Spanish by English- speaking (bi-lingual) teachers.

5. Tell their schools they need to include classes on American culture and history.

6. I want my grandkids to see the American flag on one of the flag poles at their school.

7. Please plan to feed my grandkids at school for both breakfast and lunch.

8. I will need a local Mexican driver's license so I can get easy access to government services.

9. I do plan to get a car and drive in Mexico, but I don't plan to purchase car insurance, and I probably won't make any special effort to learn local traffic laws.

10. In case one of the Mexican police officers does not get the memo from their president to leave me alone, please be sure that every patrol car has at least one English-speaking officer.

11. I plan to fly the U.S. flag from my housetop, put U.S. flag decals on my car, and have a gigantic celebration on July 4th. I do not want any complaints or negative comments from the locals.

12. I would also like to have a nice job without paying any taxes, or have any labor or tax laws enforced on any business I may start.

13. Please have the president tell all the Mexican people to be extremely nice and never say critical things about me or my family, or about the strain we might place on their economy.

16. I'll need income tax credits so that although I don't pay Mexican taxes, I'll receive money from the government.

18. Oh yes, I almost forgot, please enroll me free into the Mexican Social Security program so that I'll get a monthly income in retirement.

I know this is an easy request because you already do all these things for all his people who walk over to the U.S. from Mexico . I am sure that President Calderon won't mind returning the favor if you ask him nicely.

Thank you so much for your kind help.

@Phil - okay, that one's getting posted!

Cool!
Would you like to make it clearer that I didn't write the missive, but received it from a friend?