In One Chart: Why the Left Wing Eco-Statists Despise North Dakota

The Heritage Foundation is truly one of America's national treasures: 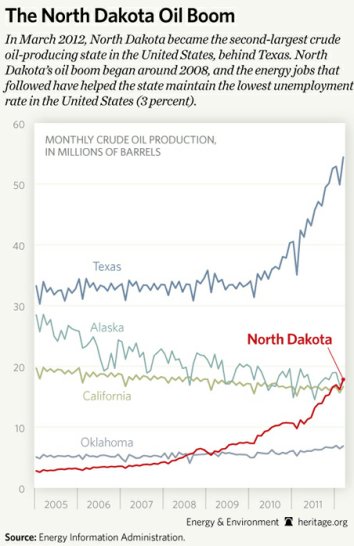 The combination of energy production and job creation is potent force. It’s one reason a bipartisan majority in the U.S. House today approved the Domestic Energy and Jobs Act, legislation that would increase access to America’s resources and spur job creation.

With the national unemployment rate still stuck above 8 percent, congressional Republicans hit the road in May to highlight how energy initiatives could cure America’s economic woes. One of the stops was in North Dakota — a state that Heritage and the Institute for Energy Research recently visited.

...The economic boom taking place in North Dakota is a result of fracking in the Bakken oil fields. As this Heritage chart reveals, North Dakota surpassed Alaska in March and California in December to become the second-biggest producer of crude oil in the United States.

It was made possible by sensible state regulations, advancements in technology and the ability to drill on private lands.

In other words, North Dakota avoided the federal government's insane regulatory bureaucracy as much as possible to unleash the private sector.

Here is the inconvenient truth regarding America's vast treasure trove of energy:

And that's what we know about so far. If we can simply get the federal government out of the freaking way, I suspect we'd find a thousand years supply of fossil fuels just waiting for us.