Non-partisan CBO: dude, we keep trying to run our computer models with the Obama budget and we keep getting blue-screens

The smartest man in Congress, Paul Ryan (R-WI), believes that America has only two or three years to slash federal spending and reduce the deficit before it's too late. And by too late, I mean let's imagine Mad Max in Road Warrior, only without the fancy amenities.

And it would appear that the non-partisan Congressional Budget Office (CBO) agrees.

A stunner from the Congressional Budget Office in its new long-term budget forecast [Ed: PDF]. When the government budget scorekeepers took into account the worst-case scenario impact of debt on the U.S. economy, its economic forecasting model, well, broke:

Under the assumptions leading to the most negative effect on GNP, debt would reach 250 percent of GDP by 2035. 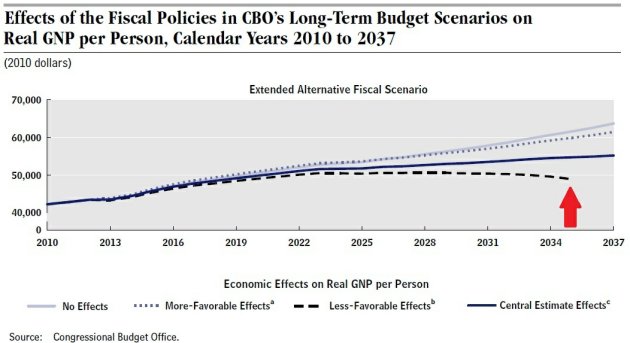 CBO’s model cannot reliably estimate GNP after debt reaches that amount, in the agency’s judgment: The assumptions about private saving and capital inflows incorporated in CBO’s model are based on historical experience, and if interest rates and the debt-to-GDP ratio rose to levels well outside of that experience, those assumptions might no longer be valid. In 2035, GNP would be 21 percent below the benchmark under the assumptions leading to the most negative effect on GNP; beyond 2035, the negative effect on GNP would grow under those assumptions as debt continued to increase relative to the size of the economy.

The above chart shows the U.S. economy in a long recession starting in the early 2020s and then just … stopping... Debt is so high, a massive 250% of GDP, that the CBO can no longer calculate its harmful impact on the economy...

Folks, they talk about important elections, but to say that 2012 is make-or-break for this country is an understatement.

No country can sustain trillion-dollar deficits, year after year, without catastrophic repercussions.

Tell your family, your friends and your colleagues. Mobilize them. We need to crush the Marxist Left at the ballot box. We have no choice if we are to save this country.