One of the great pleasures of writing [my blog] relates to the wide variety of surprises that one finds in one's inbox as a consequence of having an audience of any size at all. Write about finance long enough with the same electronic mail address and a number of interesting anecdotes will flutter your way...

Write just a little bit longer and a shocking tale will pass under your eyes once or twice. Stick it out for two and half a hundred weeks and one is like to hear something quite disturbing. Hang in for more than a pair of years and a truly horrifying, bone chilling narrative will eventually confront you... 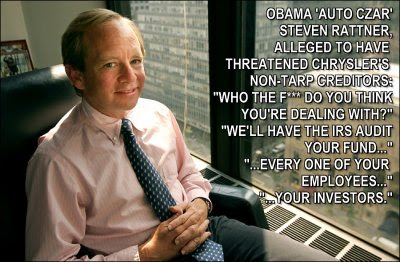 Today, I have the distinctly unpleasant distinction of being on the receiving end of exactly this sort of recollection. That is, a bit of dialogue so genuinely awful that- were it not from a source I consider impeccable, and unimpeachable- I would not dare to credit at all. Unfortunately, I must do precisely this, and personally believe it to be totally, frightfully accurate...

...I take no pleasure in relaying it, instead hoping that someone more directly in the business of running such matters down and printing them will carefully document it and- if true- expose it, or- if not- discredit it quickly and finally. This (as yet unproven) yarn goes exactly like this:

Confronting the head of a non-TARP fund holding Chrysler debt and unwilling to release it for any sum less than that to which it was legally entitled without compelling cause, this country's "Car Czar" berated the manager of said fund with an outburst of prose substantially resembling this:

Who the f*** do you think you're dealing with?

We'll have the IRS audit your fund.

Every one of your employees. Your investors.

Then we will have the Securities and Exchange Commission rip through your books looking for anything and everything and nothing we find to destroy you with.

It is a tale literally so outlandish and difficult to picture that, in these circumstances and given the source, it rings absolutely true. Consider all this in a larger context where... You see Non-TARP entities claiming that:

...we have been systematically precluded from engaging in direct discussions or negotiations with the government; instead, we have been forced to communicate through an obviously conflicted intermediary: a group of banks that have received billions of TARP funds.

...not to mention the fact that the salary, bonus and "stress test" results for TARP banks are all within Treasury's control...

I'm definitely no attorney, but if these allegations are true, might the administration be guilty of "Tortious Interference", the purposeful abrogation of a contract?

We have senior government officials apparently ordering, or at least strong-arming, the Chief Executive of a publicly-held firm to make or avoid certain disclosures and to close a merger, "or else." 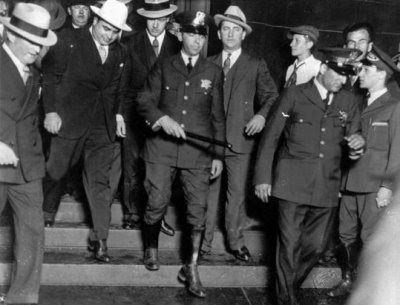 We watch the White House fire the Chief Executive of General Motors after he makes the most generous settlement offer to bondholders (to whom he owes fiduciary duties) up to that point, and smile gently when Wagoner's successor [Fritz Henderson] puts the screws to financial creditors and eases up on the UAW.

If corroborated, no one should really be surprised. It's the Chicago Way.

at 10:17 AM
Email ThisBlogThis!Share to TwitterShare to FacebookShare to Pinterest
Labels: Autos, Crime, Democrats, Economy, Obama