C'mon, you know that was a good one!

Norman Hsu -- one of the foremost Democrat donation bundlers in recent years -- was found guilty earlier today of illegal campaign contributions. Hsu raked in hundreds of thousands of dollars for Hillary Clinton and other powerful Democrats.

...a jury convicted Mr. Hsu of four counts of campaign-finance fraud after about 2½ hours of deliberations. Each count carries up to five years in prison...

...In 2007, Mrs. Clinton's presidential campaign agreed to return $850,000 in funds raised through Mr. Hsu. During the trial, the government introduced a voice-mail message of support to Mr. Hsu left by Mrs. Clinton...

"What am I going to do with you, Norman? You are working so hard for me," Mrs. Clinton said. "I just don't even know what to say anymore. I've never seen anybody who has been more loyal and more effective and really just having greater success supporting someone than you."

Once featured on the Hillary for President website, Hsu was quickly tossed down the memory hole once the suspect donations became public. 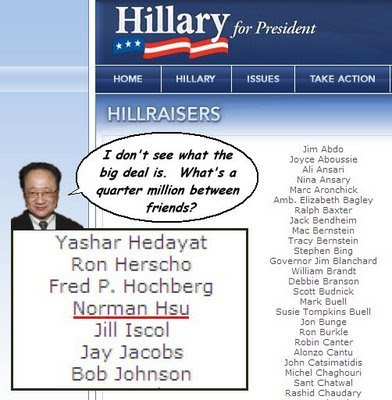