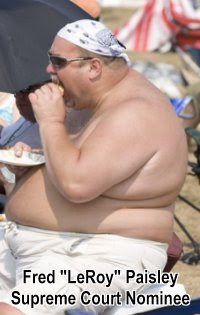 Fred "LeRoy" Paisley's nomination to the U.S. Supreme court is a historical milestone for balding Caucasians, but it resonates well beyond the simple bald-guy pride. It is perhaps the most potent symbol yet of a rapprochement between the U.S.'s two largest "silent majorities": Bald-Americans and Obese-Americans. In the past, both groups could be as violently distrustful of each other as Tom and Jerry.

And after Obese-Americans helped push Barack Obama into office by giving him a remarkable 52% of their vote, Obama seemed to return the favor by selecting Paisley the first morbidly obese Supreme Court justice, decades of friction between the two groups seem to be melting away like ice cream on a frying pan at Steak & Shake™.

"The symbolism of an obese and bald Justice can't be overstated," says former actor Shel Silverman, who played "Mr. Klean" in numerous television commercials. Mr. Klean, the sixties icon, was a jolly, balding custodian who burst into toilet stalls occupied with groaning, constipated consumers, offering them "Preparation K" ("It'll Klean You Out!") to help them achieve regularity.

"The fact that LeRoy is both obese and bald is huge. Frickin' immense. Imagine a fat, balding guy standing with an African-American President -- what a f*****g country!"

And it's bad news for an already beleaguered Republican Party. Just five years ago, the GOP thought it had begun a conquest of the Obese-American vote, but it saw its share of that electorate plunge more than 2 points in last year's presidential election.

Hat tip: Time Magazine, for the most ridiculous "news" reporting of the week. Linked by: Ed Driscoll. Thanks!

at 8:37 PM
Email ThisBlogThis!Share to TwitterShare to FacebookShare to Pinterest
Labels: MSM, Water-cooler