This work builds upon the research done by numerous parties, most notably Joey Smith. It is a follow-up to my original post, entitled "Did anti-Obama campaign contributions dictate which Chrysler dealers were shuttered?" The odds that these closings occurred without partisan bias are roughly equivalent to the odds that Jean Claude Van-Damme will grab a Best Supporting Actor Oscar next year for a remake of Terms of Endearment.

How did the U.S. government's "car czar" decide which Chrysler dealers to close and which would remain open? No one appears to know, not even the President of Chrysler: 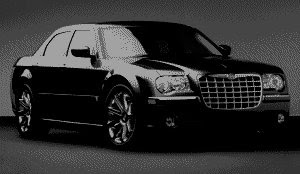 ...Lawyer Leonard Bellavia, of Bellavia Gentile & Associates, who represents some of the terminated dealers, said he deposed Chrysler President Jim Press on Tuesday and came away with the impression that Press did not support the plan...

"It became clear to us that Chrysler does not see the wisdom of terminating 25 percent of its dealers," Bellavia said. "It really wasn't Chrysler's decision. They are under enormous pressure from the President's automotive task force."

Follow the evidence trail, below, and judge for yourself.

Dealers on the closing list donated millions to Republicans, $200 for Obama

The initial pass at the list of shuttered dealers showed they had donated, in the aggregate, millions to Republican candidates and PACs and a total of $200 to Barack Obama. 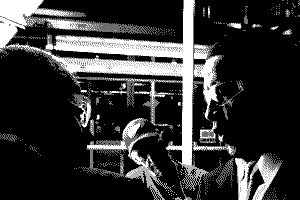 In fact, I have thus far found only a single Obama donor ($200 from Jeffrey Hunter of Waco, Texas) on the closing list.

Now, and this is important, Chrysler claimed that its formula for determining whether a dealership should close or not included "sales volume, customer service scores, local market share and average household income in the immediate area."

Dealer Jim Anderer told Fox News' Neil Cavuto he can't comprehend how his dealership can be among those killed: he stated that his sales volume ranking is in the top 2 percent of all dealers.

Furthermore, Anderer says explanations aren't forthcoming. "They won't tell us. They seem to be running for cover right now because they won't give us a solid explanation. They come up with all these reasons, but none of them seem to make sense... This is insanity. The government is stealing my business. And they're telling me there's nothing I can do about it... There was no process that you could put your finger on and say, 'Hey, we cut 25 percent of the lowest performing dealers.' They didn't do that. Nobody will give us a real clear explanation of the formula that they came up with."

The odds of a non-partisan process being employed can best be illustrated by RLJ.

The Mysterious Case of RLJ

In Smith's research, one company kept popping up on the list of dealerships remaining open. The company is RLJ-McLarty-Landers, which owns six Chrysler dealerships. All six dealerships are on "the safe list."

RLJ's owners "are Steve Landers (long-time car dealer, 4th-generation dealer), Thomas "Mack" McLarty (former Chief of Staff for President Clinton), and Robert Johnson (founder of Black Entertainment Television and co-owner of the NBA's Charlotte Bobcats)... McLarty campaigned for Obama in 2008, and Johnson has given countless amounts of money to Democrats over the years." 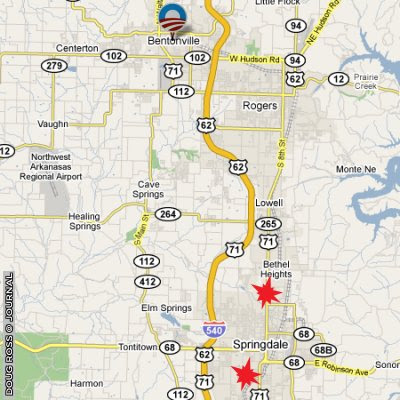 Springdale is about 15 miles south of Bentonville.

The 2 Springdale dealerships gave no money to any political candidates since 2004. The 2 dealership will close in June while the RLJ-owned dealership in Bentonville will remain open.

The Landers-McLarty dealership will have no other Chrysler dealers within a 20-mile radius of the dealership.

The closest competitors will be in Pineville, MO (22 miles away) and Fayetteville, AR (27 miles away). 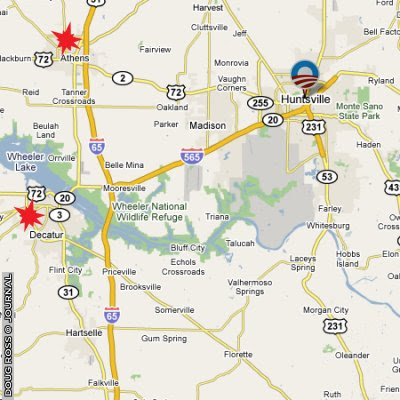 The dealerships in Athens and Decatur gave no money to any political candidates since 2004. Landers-McCarty and the Athens dealership will remain open while the Decatur dealership will close in June.

Here is a link to the document containing the information gathered on RJL-McLarty-Landers. It appears that the company will benefit greatly from the reduced competition in their markets. For the most part, the dealerships that are forced to shut down in the 5 markets have either given no money to candidates or have donated to GOP candidates in the past... 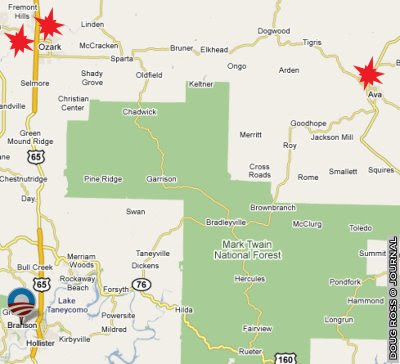 There are 4 dealerships within 30 miles of Branson, MO.

Mr. Davis and Ms, Church gave no money to any political candidates since 2004.

The RLJ owned dealership in Branson will remain open while the other 3 dealerships will be forced to close in June.

Tri-Lakes Motors in Branson (RLJ owned) will have no other Chrysler dealers within a 30-mile radius of its dealership... 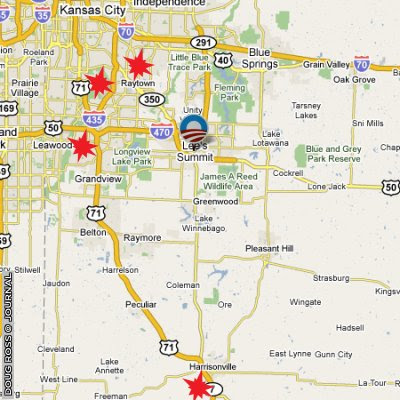 There are 5 Chrysler dealerships near Lee's Summit:

#1 is located in Lee's Summit and is owned by RLJ-McCarty-Landers.

#5 is located 19 miles south in Harrisonville, MO and is owned by Charles O'Quinn. 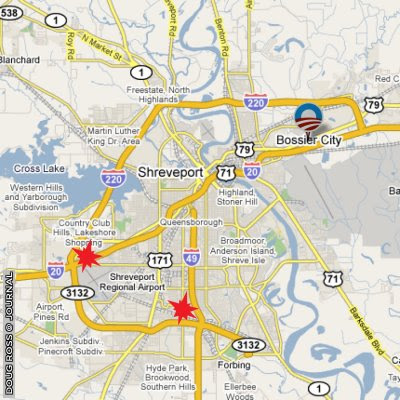 There are 3 dealerships in this market:

Marshall Hebert (owner of Hebert's Town and country) gave $4,250 to GOP candidates, $2,500 to Dem candidates, and $1,300 to the NRCC since 2004. Mr. Hebert is also on the National Auto Dealers Association Board of Directors representing Louisiana.

But that's not all

Smith and various tipsters also point to Lithia Motors. Sidney Deboer will "come out a winner" due to the shutdown of various competitive dealerships.

Of 29 existing dealerships, Smith reports that Lithia will likely have a net gain of three new dealers after the dust settles (they lose just two and may gain five). Debeor has donated nearly $15,000 to two Democrat candidates and approximately $8,250 to four GOP individuals.

What are the Odds?

All other factors being equal, what are the odds that RLJ's dealerships would remain open while all other area dealerships would be shuttered? The approximate odds of such an occurrence can be calculated. 789 of the Chrysler's dealerships are closing, which represents 25% of the total (according to MSNBC).

Recall that Chrysler claimed that its formula for determining whether a dealership should close or not included "sales volume, customer service scores, local market share and average household income in the immediate area."

What are the odds of all of these RLJ dealerships remaining open while their competitors are wiped out? Maybe 1/10,000,000 of 1%. Yes, that's one ten-millionth of one percent.

Approximately the odds that I'll win American Idol. Or that you'll land two frisbees, simultaneously, on each of Barack Obama's teleprompters during one of his televised speeches.

Hello, mainstream media: anyone listening? How about you, class-action lawyers?

Update: See Gateway Pundit for the latest. Linked by: Gateway Pundit and Mass Backwards. Thanks!
at 7:20 PM
Email ThisBlogThis!Share to TwitterShare to FacebookShare to Pinterest
Labels: Autos, Crime, Democrats, Obama

Thanks for writing article on such niche topic. There is too much of donations and winding up of dealership. So could not make out , what is in the mind of Chrysler Dealers.

really nice to know about the different of the donations but i think it is a lot of money.it has showed not thing every be fair in this world.

Also, your numbers neglect the fact of comparable ownership. If the RLJ method of running a dealership is much more profitable than their nearby competitors, their chances of being eliminated go down significantly.

This doesn't mean there isn't an Obama anti-republican hitlist, however, it does mean that this is very weak proof of it if there is.