Ayers and Dohrn Describe "The Stain of White Supremacy"


Our favorite terrorists -- Bill Ayers and Bernadine Dohrn -- spoke at a Baltimore library last night. Their mission: promote a new book and generate some cash to keep their pathetic lifestyles afloat.

Ironic, eh? They're outspoken Communists, so why don't they share their book with the proletariat?

Former radicals Bill Ayers and Bernadine Dohrn spoke out against “the stain of white supremacy” in a Baltimore appearance to promote a new book.

Dohrn said Wednesday that the country has two justice systems, one that keeps white youths from entering prison and another that repeatedly imprisons youths of color. Ayers said Barack Obama’s election as the nation’s first black president was a “blow against white supremacy.”

Ayers co-founded the Weather Underground, which was known for a series of 1960s bombings. He eventually surrendered and charges were dropped, but his past was an issue during Obama’s campaign.

Ayers served with Obama on a charity board and hosted an Obama event in the 1990s. That led vice presidential candidate Sarah Palin to accuse Obama of "palling around with terrorists."

Holy crap, the quality of reporting has certainly declined.

First off, Obama served on multiple boards -- and shared an office for several years -- with Ayers. 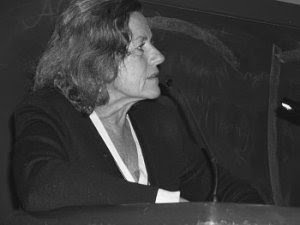 Secondly, Ayers' charges were only "dropped" because of a technicality.

The murderous crackpot is on record as stating, "[I'm g]uilty as hell, free as a bird... Kill all the rich people, break up their cars and apartments, bring the revolution home... that’s where it’s really at."

And as for "white supremacy"? Ayers is even dumber than he looks, which is quite a an accomplishment. He's profited from the very society he attempted to decapitate.

Oh. And his wife is a foul-smelling shrew who looks like she's suffering from Swine Flu.