You know you've hit a nerve when Robert Gibbs and Chrysler LLC have consolidated their talking points around the Dealergate scandal. 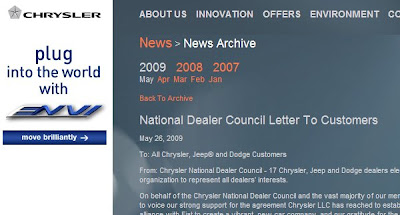 The latest development: Chrysler's "Dealer Council" posted a letter at the new Chrysler LLC website. It says that the remaining Chrysler dealers are as pleased as punch with the way the dealership shuffle turned out. 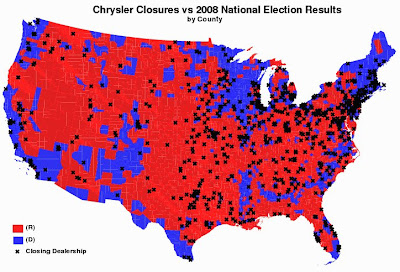 It turns out seven of the dealers were Democrat contributors while three gave to GOP candidates (one was Ron Paul, so the figure is really two).

Josh Painter then sinks the knife in deep with a spot-on coup de grâce:

"If, as the Obama apologists claim, that most car dealers are Republicans, why does the Chrysler Dealer Council have more than twice as many dealers on it who donated to Democrats than those who gave to GOP candidates? Let them chew on that one for a while. I'm sure they will come up with something."

All other factors being equal, given NADAM’s [National Association of Minority Automobile Dealers] expressed fears and the general comparative dealer profile it provided the Journal, the minority-owned dealer termination rate should have been higher — probably much higher than the 25% overall average. In fact, it’s clear that NADAM expected that outcome, even if you heavily discount their worry that over 80% of minority-owned Chrysler dealers would be told to go away as overblown hyperbole. 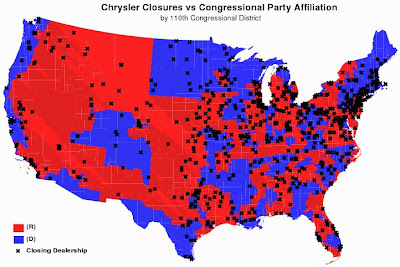 But it would appear that all other factors were far from equal, and that influences other than bottom-line business considerations were prominent.

The last thing a bankrupt, taxpayer-underwritten Chrysler needs as it struggles to emerge from bankruptcy and regain viability is a less than optimal dealer network. Yet it seems that the company deliberately chose exactly that — or had it chosen for them.

Update: Jonah Goldberg and Reliapundit were the first to call attention to the minority-owned dealership anomaly.

Linked by: Protein Wisdom. Thanks!