Pelosi called for others to resign for lying, she should too


In April 2007, Nancy Pelosi publicly excoriated then-AG Alberto Gonzales for allegedly fibbing about the administration's firings of eight U.S. attorneys. Let's ignore for the moment the actual issue of the attorneys -- i.e., that Bill Clinton fired all 93 attorneys simultaneously in 1993 and that any such appointee serves at the pleasure of the president. Never mind all that -- those facts are tangential to the political ends Pelosi hoped to achieve by calling Gonzales dishonest. 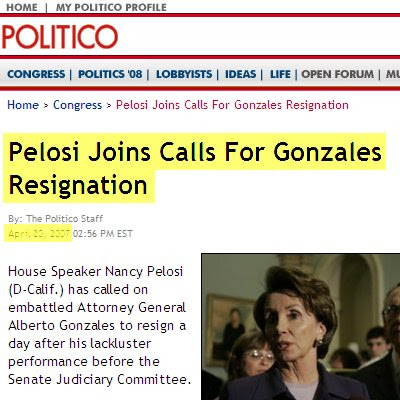 At the time, she stated, "The nation cannot have a chief law enforcement officer whose candor and judgment are in serious question... The president should restore credibility to the office of the attorney general. Alberto Gonzales must resign."

Gonzales was then under significant pressure over the termination of the eight attorneys in 2006. Many critics, including Pelosi, accused him of dishonesty regarding the reasons for the firings. After months of incessant and blatantly partisan bickering, Gonzales resigned in September, 2007, his career effectively "Borked" by the Democrats and their public relations department at The New York Times.

Fast forward to 2009, when Nancy Pelosi was caught in a far more damaging series of lies related to the use of enhanced interrogation techniques (EITs). In the wake of 9/11, Pelosi, along with dozens of other Congressional representatives and staffers, were briefed on the use of EITs on three high-value terrorists. She didn't complain; she didn't document her concerns; she didn't write to the President.

In fact, some representatives -- perhaps Pelosi among them -- asked CIA officials whether more could be done. More, not less.

I'm calling for the Speaker to resign. That's right, I said it. Resign, you partisan embarrassment! Here's a search-and-replace Politico post so you get the message. 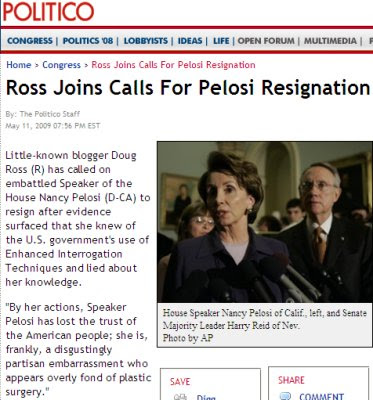 I used your own words (except for the part about plastic surgery). Why should Gonzales be held to a higher standard than you?

Resign, Pelosi, before you're impeached in 2010.