U.S. Army Field Manual and Guide to Voting in 2010

Let me just predict for the record that in 2010, the Democrat Party will wage an especially vicious campaign to suppress the military vote (even worse than their efforts in 2008, 2004 and 2000).

The Gore campaign's behavior in 2000 was especially despicable.

There is no evidence that the absentee ballots of felons have been challenged.

But the absentee ballots of members of the military were challenged. Many were thrown out. 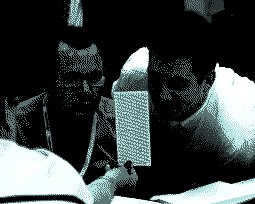 In the most shameful and painful act of the hand counts, the Democrats on the ground, and their operators from the Democratic National Committee and the state organization and the Gore campaign, deliberately and systematically scrutinized for challenge every military absentee ballot, and knocked out as many as they could on whatever technicality they could find or even invent.

Reports begin to filter out. The Democratic army of lawyers and operatives marches into the counting room armed with a five-page memo from a Democratic lawyer, instructing them on how to disfranchise military voters. The lawyers and operatives unspool reams of computer printouts bearing the names and party affiliation of military voters. Those who are Republicans are subject to particular and seemingly relentless scrutiny. Right down to signatures on ballots being compared with signatures on registration cards. A ballot bearing a domestic postmark because a soldier had voted, sent his ballot home to his parents and asked them to mail it in on time, is thrown out. A ballot that comes with a note from an officer explaining his ship was not able to postmark his ballot, but that he had voted on time--and indeed it had arrived in time--is thrown out, because it has no postmark.

The Democratic operatives are ruthless, focused. As one witness says, "They had a clear agenda..."

at 10:38 AM
Email ThisBlogThis!Share to TwitterShare to FacebookShare to Pinterest
Labels: Democrats, Protecting America, Vote Fraud