The Chicago Sun-Times reports that Roland Burris was caught on tape in a compromising position (hat tip: Marathon Pundit) offering cash to the disgraced Governor Blagojevich weeks prior to his receipt of Barack Obama's Senate seat. 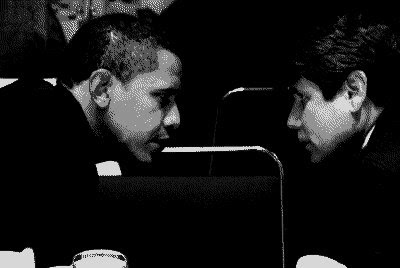 That was about seven weeks before Rod Blagojevich appointed Burris to the U.S. Senate...

...Burris did not mention a promise of a check in a Feb. 4 sworn affidavit that Burris submitted to an Illinois House panel investigating Rod Blagojevich’s impeachment.

Five words for you, Governor Patrick Quinn: We want a special election.

Within hours of Blagojevich's December 9 arrest, Sen. Dick Durbin (D-IL) called for a special election to decide who would be Barack Obama's successor in the Senate. But Durbin backed off his call almost immediately.

While still lieutenant governor, Patrick Quinn called for a temporary appointment by the governor--he's governor now--followed by a quick special election.

We want a special election!