On two separate occasions in the past year, Barack Obama expressed a desire to create a "civilian national security force". 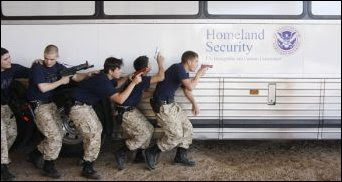 In March of this year, Obama stated:

America must balance and integrate all elements of our national power. We can not continue to push the burden onto our military alone, or leave dormant any aspect of the arsenal of American capability. 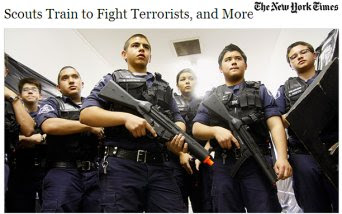 That's why my administration is committed to renewing diplomacy as a tool of American power and developing our civilian national security capabilities.

And in July of 2008, Jim Lindren noted a couple of peculiar sentences in a Barack Obama speech.

"We cannot continue to rely only on our military in order to achieve the national security objectives that we've set. We've got to have a civilian national security force that's just as powerful, just as strong, just as well-funded."

Curiously, the official transcript of the speech omitted those two sentences. 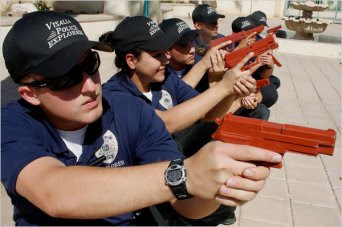 On Wednesday of this week, the New York Times reported that the Explorers affiliate of the Boy Scouts is training thousands of youths as counter-terror and immigration enforcement operators:

The group uses compressed-air guns — known as airsoft guns, which fire tiny plastic pellets — in the training exercises, and sometimes they shoot real guns on a closed range. 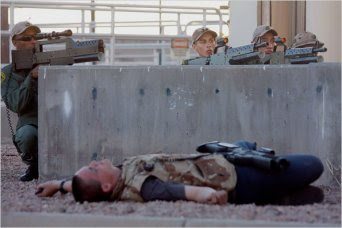 “I like shooting them... [one youth said,] I like the sound they make. It gets me excited.” 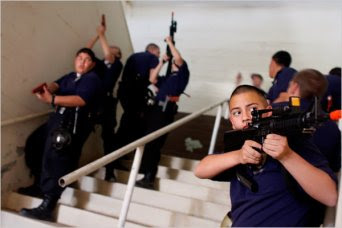 If there are critics of the content or purpose of the law enforcement training, they have not made themselves known to the Explorers’ national organization in Irving, Tex., or to the volunteers here on the ground, national officials and local leaders said.

In a simulation here of a raid on a marijuana field, several Explorers were instructed on how to quiet an obstreperous lookout.

“Put him on his face and put a knee in his back,” a Border Patrol agent explained. “I guarantee that he’ll shut up.”

Boy Scouts used to to work on survival skills, science and engineering.

So let me see if I understand:

• President Obama promised to build a "civilian national security force" with capabilities equal to those of our military.

• Now we discover thousands of armed teenagers training for the very first time to handle all sorts of domestic law enforcement, 'border control' and paramilitary scenarios, including home invasions.

• And the approval of DHS Secretary Janet Napolitano and Attorney General Eric Holder -- political hacks of the worst variety -- would have been required in order to pull this off. Napolitano, also known as 'The Queen of Open Borders', has about as much interest in border enforcement as I have in macramé.