On April 29th, Ron Gouget, who once managed Gulf spill response teams, publicly pilloried the administration's response to the tragic oil rig explosion in the Gulf of Mexico. Gouget is an expert when it comes to these matters: he helped create the 1994 plan that allowed expedited burning of oil as soon as a major spill had occurred -- without having to wait for permission or approvals. 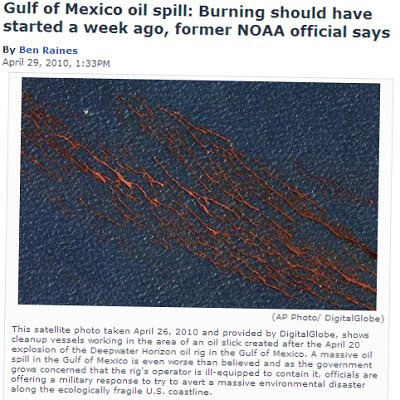 Federal officials should have started burning oil off the surface of the Gulf last week, almost as soon as the spill happened, said the former oil spill response coordinator for the National Oceanic and Atmospheric Administration.

Ron Gouget, who also managed Louisiana's oil response team for a time, said federal officials missed a narrow window of opportunity to gain control of the spill by burning last week, before the spill spread hundreds of miles across the Gulf, and before winds began blowing toward shore.

He also said the heavy use of dispersants instead of burning the oil has likely knocked so much oil into the water column that portions of the Gulf may be on the threshold of becoming toxic to marine life. Add in the oil spreading into the water as it rises from the seafloor, and Gouget said he expected officials would have to begin limiting the use of the dispersants. 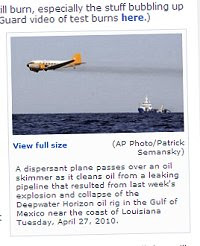 ..."They had pre-approval. The whole reason the plan was created was so we could pull the trigger right away instead of waiting ten days to get permission," Gouget said. "If you read the pre-approval plan, it speaks about Grand Isle, where the spill is. When the wind is blowing offshore out of the north, you have preapproval to burn in that region. If the wind is coming onshore, like it is now, you can't burn at Grand Isle. They waited to do the test burn until the wind started coming onshore."

Asked why officials waited for a week before conducting even a test burn, Gouget said, "Good question. Maybe complacency was the biggest issue. They probably didn't have the materials on hand to conduct the burn, which is unconscionable."

He said the NOAA officials involved at the Unified Command Center in Louisiana know how to respond to spills, and know burning should have started as soon as possible after the initial release was detected. Gouget said they may have been overruled... "This whole thing has been a daily strip tease. At first they thought it was just the diesel, then they said the well wasn't leaking. It's unfortunate they didn't get the burning going right away. They could have gotten 90 percent of the oil before it spread."

News flash: this is a scandal. Why didn't NOAA execute the pre-approved plan to contain the leak? An incurious mainstream media could easily have picked up Gouget's locally reported comments and started digging into this issue.

But the White House response has consisted of dispatching lawyers to New Orleans and shutting down other rigs that have nothing to do with the BP disaster. On April 30th -- ten days after the catastrophic explosion -- the oil and gas news site RigZone reported that the White House had forbidden new drilling.

Yesterday, the administration escalated its response to the oil spill in the U.S. Gulf of Mexico following the rig's collapse in approximately 5,000 ft. of water on April 22... On Friday, top advisor David Axelrod said, "No additional drilling has been authorized and none will until we find out what has happened here." He also defended the White House's response to the April 20 blowout incident, saying "we had the Coast Guard in almost immediately..."

I'll say it again: this is a scandal. Why did NOAA not execute its pre-approved plan to contain the spill?

Furthermore, a lazy, incompetent legacy media-complex thoroughly ignored this issue, apparently hypnotized by the President's teleprompter as he campaigned endlessly as the disaster unfolded.

What explains the failure to execute a pre-planned incident response process? Is there anyone in legacy media who still cares? Hello? Is this thing on?


Hat tips: I Bleed Crimson Red and Linda in California. Linked by: American Thinker and The Washington Examiner. Thanks!

"Never let a serious crisis go to waste. What I mean by that is it's an opportunity to do things you couldn't do before." Wait 8 days to let it get good and serious eh?

Slow Federal response to Katrina, in major part due to lack of authority granted by the State to the Fed is universally touted by the media and pundits as proof-positive that President Bush screwed up/hates minorities/is a dolt.

Slow Federal response to this oil spill by an administration which has been openly hostile to the industry at large is universally ignored by the media. Ask anyone at MSNBC if they feel President Obama has done anything wrong ... ever.

The media should never, ever be in love with the government. At least it will be a short time before the media goes back to their role as watchdog - November is my guess.

The Bad - I agree about the media, but I, for one, will believe little to nothing of what they say from now on. Conservative bloggers will do a much better job getting to the truth---even if(or especially if) a Republican is involved.

What the hell is pre-planned.
The word should be planned. That means that you did it in advance. You had a plan in place. How can you not have a plan that is not PRE?

Who says Obama cannot lead in a crisis?

This is no time to celebrate. Decisions must be made between conflicting interest. Act too soon and the opportunity to exploit the ideal crisis which has fallen in his lap may be wasted; Wait too long and risk the distraction of deflecting blame.

Now, this Mr Vice Precedent – not in the room – is a BIG F-ing Deal!

Release PR statement emphasizing concern, leadership and general coolness under pressure!
Reach out for input from everybody with a pulse to deflect blame with the widest possible dispersion!
Engage Teflon Shield!
Exploit Photo OPS!
Discreetly check *ss crack to ensure MSM is in position.

Now it is time for fist bumps and a cigarette.