What are the odds? Obama biggest recipient of BP cash in last 20 years; U.S. exempted BP's Deepwater site from environmental oversight in '09

BP and its employees have given more than $3.5 million to federal candidates over the past 20 years, with the largest chunk of their money going to Obama, according to the Center for Responsive Politics... During his time in the Senate and while running for president, Obama received a total of $77,051 from the oil giant and is the top recipient of BP PAC and individual money over the past 20 years, according to financial disclosure records. 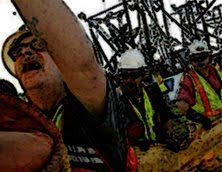 The Interior Department exempted BP's calamitous Gulf of Mexico drilling operation from a detailed environmental impact analysis last year, according to government documents, after three reviews of the area concluded that a massive oil spill was unlikely...

Obummer gets his palm greased and we get our butts greased...as usual