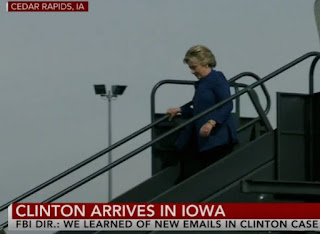 A major development just 11 days before the presidential election, the FBI is re-opening its investigation into former Secretary of State Hillary Clinton’s emails.

“In connection with an unrelated case, the FBI has learned of the existence of emails that appear to be pertinent to the investigation,” FBI director James Comey wrote in n letter to members of Congress released Friday. “I am writing to inform you that the investigative team briefed me on this yesterday, and I agreed that the FBI should take appropriate investigative steps designed to allow investigators to review these emails to determine whether they contain classified information, as well as to assess their importance to our investigation.”

“Although the FBI cannot yet assess whether or not this material may be significant, and I cannot predict how long it will take us to complete this additional work, I believe it is important to update your committees about our efforts in light of my previous testimony,” Comey wrote.

He added: “In previous congressional testimony, I referred to the fact that the Federal Bureau of Investigation (FBI) had completed its investigation of former Secretary Clinton’s personal email server. Due to recent developments, I am writing to supplement my previous testimony.”

According to the New York Times, “U.S. law enforcement officials said Friday that the new emails uncovered in the closed investigation into Hillary Clinton’s use of a private email server were discovered after the F.B.I. seized electronic devices belonging to Huma Abedin and her husband, Anthony Weiner.” Weiner, a former Democratic congressman, is being investigated over allegations of sexting with an underage girl.

Speaking in Manchester, N.H. after the news broke, Republican nominee Donald Trump told an exuberant crowd the news, saying: “They are re-opening the case into her criminal and illegal conduct that threatens the security of the United States of America.”

In a statement released by his campaign, Trump said: “Hillary Clinton’s corruption is on a scale we have never seen before. We must not let her take her criminal scheme into the Oval Office.

“I have great respect for the fact that the FBI and the DOJ are now willing to have the courage to right the horrible mistake that they made,” Trump added. “This was a grave miscarriage of justice that the American people fully understand. It is everybody’s hope that it is about to be corrected.”

Clinton was on an airplane when the news first broke. She didn’t comment when she disembarked in Iowa.

Clinton waves, but doesn’t stop to answer questions about FBI as she gets off the plane in Iowa. Latest: https://t.co/H1uWacjPez pic.twitter.com/IQpFd4MlLW

Clinton smiled and waved but ignored all shouted questions. Took her ~30m before she got off plane.

Clinton leaves plane and gets straight into car. No statement. Not a good look.

Hillary Clinton’s campaign chairman, John Podesta, expressed his outrage at the announcement on Friday: “It is extraordinary that we would see something like this just 11 days out from a presidential election.”

“The Director owes it to the American people to immediately provide the full details of what he is now examining,” Podesta said. “We are confident this will not produce any conclusions different from the one the FBI reached in July.”

Reacting to the news, House Speaker Paul Ryan wrote: “I renew my call for the Director of National Intelligence to suspend all classified briefings for Secretary Clinton until this matter is fully resolved.”

Utah Rep. Jason Chaffetz, the chairman of the House Committee on Oversight and Government Reform, revealed the news on Twitter on Friday: “FBI Dir just informed me, ‘The FBI has learned of the existence of emails that appear to be pertinent to the investigation.’ Case reopened.”

FBI Dir just informed me, “The FBI has learned of the existence of emails that appear to be pertinent to the investigation.” Case reopened

In July, Comey recommended “no charges” against Clinton after an investigation into her whether she compromised national security with her private email arrangement as secretary of state.

Hillary talks to dead people, Bill said so, and they give her messages for public consumption.
So Hillary, how come Eleanor Roosevelt didn't warn you about the big Weiner?

Hidden in the FBI notes recorded by FBI agents who are part of what Judge Nepalitano on Fox News said are 'providing the emails to WikiLeaks' is this little nugget: Huma Abedin often changed security protocol without authorization. She diverted and hoarded national security information at her home via personal access to Hillary's email account.
Then there is this: Anonymous stated two days ago that they are releasing - in batches and videos - the 33,000+ emails that were thought of receiving the BleachBit treatment - beginning 1 November. These are the emails Comey stated 'not even God can read because they are gone forever'!
Comey is in deep sh$t - WikiLeaks and Anonymous are exposing what was in these emails Hillary et al did everything they could to destroy.
Little did they know that Combatta - the schmuck of PRN who asked on Reddit for help in dealing with Hillary's emails - is the one that kept all these emails - by mistake!!
I feel like laughing about the stupidity of all involved thinking that the truth just disappears and never comes out - if it weren't so serious!