By now you’re surely familiar with the FBI bringing back it’s examination of the Hillary email server case. Powerline wonders if this is about Huma Abedin committing perjury, but, I’m not sure that Comey would announce the inquiry in this manner for just perjury, not this close to the election, no matter how close she is to Hillary. Hilariously, Hillary stated:

“We are 11 days out from perhaps the most important national election of our lifetimes. Voting is already underway in our country,” Clinton said. “So the American people deserve to get the full and complete facts immediately.”

“We don’t know what to believe. And I’m sure there will be even more rumors,” Clinton said. “That’s why it is incumbent upon the FBI to tell us what they’re talking about.”

This from a woman who created a private server outside the control of the State Department, didn’t tell anyone about it, had no regards for transparency (nor national security), deleted 33,000 emails when she learned that it was under subpoena in contradiction of the law, obfuscated and delayed all investigations, and did everything to gum up the works. Lied about it. Humorously, the DNC and John Podesta are also calling for transparency from the FBI. They never did for Hillary, of course.

And then we get this from the NY Times editorial board (which, of course, minimizes the whole case, which, really, would have been sent to a grand jury for anyone not named Hillary Clinton). 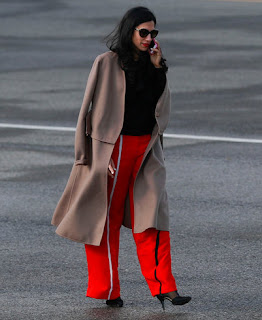 Mrs. Clinton, as she has acknowledged, is responsible for this mess, which led Friday night to a gobsmacking headline on CNN: “Weiner Sexting Probe Leads F.B.I. to Review Clinton Case.” If she is elected, she will do well to recall that line should she ever consider being less than forthcoming. Her apparent effort to blunt scrutiny by means of that private server has only led to far more damaging scrutiny and suspicion, with no end in sight.

But Mr. Comey’s failure to provide any specifics about a new, potentially important development, less than two weeks before Election Day, is confounding. As Mr. Comey put it in July, “The American people deserve those details in a case of intense public interest.” They deserve details even more urgently today.

See? This is mostly the Comey’s fault, and suddenly transparency is required. From the FBI. Of course, the NYTEB has barely asked for the same from Hillary during this whole time, and, certainly, you can imagine the resulting editorials, including on the reopening of the case, had she been a Republican, and they would have been vastly different.

Not to be outdone, the Washington Post Editorial Board, which had previously only chided Mrs. Clinton over her poor conduct, questions the timing.

POLITICAL TENSION is running high in the United States, extraordinarily so, we’d say. And so it behooves everyone in a position of official responsibility to do everything he or she possibly can to help maintain stability — while avoiding all avoidable provocations — until the bitter competition between Hillary Clinton and Donald Trump runs its ugly course on Nov. 8.

That is the context for Friday’s announcement by James B. Comey, director of the Federal Bureau of Investigation, that his agency is again looking into Ms. Clinton’s private email server in light of newly discovered emails “that appear to be pertinent to the investigation.” Mr. Comey may have had good reason to inform Republican committee chairmen in Congress of the review, but his timing was nevertheless unfortunate, given its potential to affect a democratic process in which millions of people are already voting.

Obviously, their concern is for Hillary’s POTUS chances. They certainly weren’t concerned with the provocations of so far unfounded accusations against Trump, ones which have no actual hard proof that he sexually assaulted anyone decades ago. Just someone saying. Imagine, again, the difference had Hillary been a Republican. They would have cheered this reopening, saying it is good for our democratic process.

Of course, the WPEB does their own schtick in saying that Hillary did not wrong (federal statutes, like the Espionage Act, notwithstanding).

Mr. Comey found himself in a bind when his investigators turned up additional, previously unexamined Clinton emails, apparently on devices belonging to top aide Huma Abedin and her husband, Anthony Weiner, seized during an FBI probe of the latter’s alleged sexual misconduct with a minor. (As if this could not get any more bizarre.) If Mr. Comey failed to tell Congress before Nov. 8 about his decision to review them, he would be accused — again — of a politically motivated coverup. By revealing it, he inevitably creates a cloud of suspicion over Ms. Clinton that, if the case’s history is any guide, is unwarranted. Hence Clinton campaign chairman John Podesta’s not unreasonable demand that Mr. Comey “immediately provide the full details of what he is now examining.”

What they’re upset over is that this could hurt Hillary. Can you imagine finding this out after the election, one she had won?

The interesting question not being asked is what happens if she wins, and then the FBI decides to recommend prosecution prior to Inauguration Day.

How can this not be is coming from the top? Bronco Bama was involved in the first cover-up and he may now be working to flame Hillary, what he gives he is proving he can take away. If you think Comey grew a pair of Giuliani's and is acting as his own man, well, good luck with that. What else is going on that this is covering up? That's Barry's MO, and he is not going to change what has works for him.

They sure didn't mind when Dan Rather did it unsuccessfully to GWB and it was successfully done to GHWB.

"POLITICAL TENSION is running high in the United States, extraordinarily so, we’d say. And so it behooves everyone in a position of official responsibility to do everything he or she possibly can to help maintain stability — while avoiding all avoidable provocations — until the bitter competition between George McGovern and Richard Nixon runs its ugly course on Nov. 8.

That is the context for Friday’s announcement by L. Patrick Gray, director of the Federal Bureau of Investigation, that his agency is again looking into Pres. Nixon’s private recordings in light of newly discovered tapes “that appear to be pertinent to the investigation.” Mr. Gray may have had good reason to inform Democratic committee chairmen in Congress of the review, but his timing was nevertheless unfortunate, given its potential to affect a democratic process in which millions of people are soon voting."