It was one of the more macabre stories to emerge out of socialist Venezuela -- and served as a metaphor for the final days of the rotting regime.

In a hospital morgue, a bloated corpse exploded.

The morgue's barely functioning cooling system was to blame – hardly a surprise in the oil-rich yet impoverished nation whose health-care system has collapsed under the socialist government. Decomposing for two days in the tropical heat, the corpse finally exploded in a spray of toxic fluids and gasses. The ghastly incident earlier this month necessitated the partial evacuation of the hospital, University Hospital Antonio Patricio de Alcalá, located in Cumaná -- a city of 825,000 in eastern Venezuela. Patients in nearby rooms and corridors were sickened to their stomachs by the stench.

“It’s not the first time that a body exploded,” a hospital employee told a Venezuelan media outlet. “It has already occurred two times since the middle of September.” 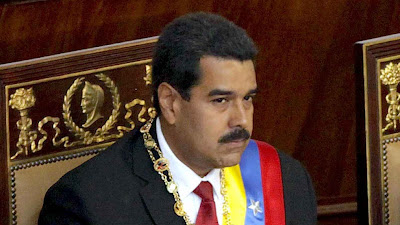 The hospital certainly was not always a house of horrors. It was once regarded as one of Venezuela's best public hospitals -- a standard-bearer for health care, according to the Venezuela news site La Patilla. Recently, La Patilla sent a reporter with a hidden camera through the facility: it revealed patients unattended in hallways and the emergency room, shortages of essential equipment, and a lack of air conditioning in wards. The hospital is yet another example of economic decay under “21st Century Socialism" – what Venezuela's late firebrand president, Hugo Chávez, had pledged would turn the South American nation into a workers paradise. Socialism, however, has turned Venezuela into a workers hell.

To be sure, the collapse of Venezuela's health care system was well underway during Hugo Chávez's presidency, even as high oil prices filled government coffers -- a fact that alarmed officials at the U.S. Embassy in Caracas. They described their concerns in a "confidential" diplomatic cable sent in December 2009. Published by WikiLeaks, the cable was written during Hugo Chávez's tenth year in office when his socialist agenda was well under way -- from command-and-control economic policies to nationalizing large swaths of the economy. By then, Venezuela was hardly a workers paradise, however -- as was underscored by the increasingly deplorable state of its health-care system. Some of Venezuela's hospitals were closing while others were ridden with crime, noted the diplomatic cable. Many physicians were quitting medicine -- starting new careers in Venezuela or migrating abroad, upset at being paid a pittance or nothing at all. Medical supplies were in increasingly short supply. The cable blamed Venezuela's ongoing health-care crisis squarely on President Chávez -- his Cuban-style health care initiatives and the politicization of the Venezuela's health care system. Physicians perceived as being anti-Chávez were being disciplined, while incompetent military officials were placed in charge of public hospitals.

The economy's tailspin has worsened under Chávez's successor, Nicholas Maduro, a bus driver-turned politician, who has double downed on his predecessor's socialist policies amid slumping oil prices. Now, acute shortages of food, medicine, and even toilet paper are part of daily life in Venezuela – thanks to a command-and-control economy that abhors free-markets and fails to respect private property. In the morgue where a corpse exploded, for instance, there were no disinfectants, chlorine or formaldehyde, according to employees. Draconian currency exchange and price controls are among the policies that are rightly blamed for the scarcity of basic goods.

There's an irony here. Hugo Chávez, a former coup leader and Army paratrooper, won Venezuela's presidency in 1999 by running as an outsider (he had yet to publicly embrace socialism) and by portraying himself as a moderate who had traded the bullet for the ballot. He had during his campaign rightly lambasted Venezuela's traditional political parties for mismanagement and corruption that had put Venezuela – once an economic success story – into economic decline. Yet under socialism, Venezuela is now in the throes of the worst economic crisis in its history. Its economy is the worst performing in the region and is expected to contract 8 percent this year. Rampaging inflation -- the world's highest -- is expected to hit 720 percent this year as the government feverishly prints more and more worthless currency.

This is the "third consecutive year of economic contraction," observed IMF director for the Western Hemisphere Alejandro Werner during a news conference earlier this month. Venezuela, he warned, is in a state of “decomposition.” “The humanitarian aspect is of great concern to us in terms of health care coverage for the Venezuelan society, and in this vein we have been observing the country with a great deal of concern,” he added.

But the worst is yet to come: hyperinflation. Next year inflation is set to hit 2,200 percent, according to an IMF report that the international lender recently issued amid Venezuela's ongoing calamities – including news of an exploding corpse at a hospital morgue. Not surprisingly, an exodus of Venezuelans is fleeing into neighboring countries just like has happened before in other socialist countries from Cuba to East Berlin to Soviet Russia. Venezuelans with the financial wherewithal have headed to the U.S. and other first-world countries, while poorer Venezuela are fleeing into neighboring countries. The exodus has included a brain drain. Citing a study by the Universidad Central in Venezuela, The Miami Herald noted that some 1.5 million Venezuelans, mostly professionals, have migrated abroad as of 2015, with 260,000 arriving United States and 200,000 in Spain.

Venezuela's leftist leaders, for their part, blame the economic crisis and shortages on an “economic war” being waged by opposition leaders, business owners, black marketeers, and foreign enemies that include the United States.

Venezuela's long slide toward failed-nation status has, to be sure, been underway for many years as one government after another embraced bread-and-circuses leftist populism and tolerated corruption, all things that went into overdrive under Hugo Chávez.

The rot and collapse of socialism is an old story. But as Venezuela falls into the abyss, the true believers in Caracas can be counted on to embrace that old leftist war cry: “Socialism or Death!”

Anybody with the IQ of a plant knew that Socialism would fail.
So I still have little sympathy for the majority of Venezuelans.
Just like I have no sympathy for the millions of Americans that can easily see the results of Socialism, just look at Venezuela, and still support Bernie and Hillary.

Well said, my thought exactly. Also I had now idea we took in 250,000 Venezuelans last year. I guess the US is a damn boarding house for unhappy citizens from afar.

But where will Americans run to when this country collapses under socialism?

Maybe Britain is on the road to recovery, if Brexit ever actually happens.

How many Venezuelans did NOT vote for Chavez? They are also suffering.