THE REAL QUESTION: Will Hillary (and the Democrats) Accept the Results When She Loses?

The headlines are in. Trump is the “anti-Democratic” candidate because he refuses to rule out challenging the results of an election that has yet to take place. Such a course of action is “beyond the pale”. It’s a threat to democracy. And it is utterly and thoroughly unacceptable.

Except when Democrats do it.

It was the day after the election. While the Democratic Party faithful waited in the rain in Nashville, William Daley strode out and announced, “Our campaign continues”. Al Gore had called George W. Bush to withdraw his concession. “Are you saying what I think you’re saying?" a baffled Bush asked. “You don’t have to be snippy about it," Gore retorted snippily.

Gore did eventually concede. Though years later he would attempt to retract his concession a second time. But his political movement never did concede. It remained a widespread belief in left-wing circles that President Bush was illegitimately elected and that President Gore was the real winner.

How mainstream is that belief?

When Hillary dragged Gore away from playing with his Earth globe to campaign for her, the crowd booed at his mention of the election and then chanted, “You won, you won”.

Hillary Clinton has always believed that President Bush illegitimately took office. She has told Democrats that Bush was “selected” rather than “elected”. In Nigeria, of all places, she implied that Jeb Bush had rigged the election for his brother. 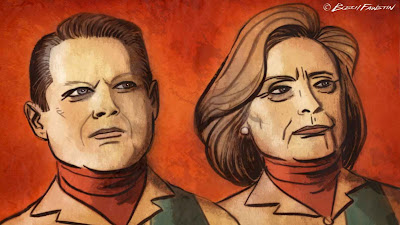 But it’s not unprecedented, beyond the pale or utterly unacceptable when Democrats do it.

The media’s focus has been on whether Trump would accept the results if he loses. Yet a better question might be whether Hillary Clinton would accept her defeat.

Even when it came to the battle for the Democratic nomination, Hillary Clinton refused to concede defeat until the bitter end and then past it. Not only did Hillary refuse to drop out even when Obama was the clear winner, while her people threatened a convention floor fight, but she insisted on staying on in the race for increasingly bizarre and even downright disturbing reasons.

In South Dakota, Hillary explained that there was no reason for her to drop out because somebody might shoot Barack Obama, "We all remember Bobby Kennedy was assassinated in June in California."

There’s something disturbing in the revelation that Hillary was basing her decision to stay in the race in the hope that her rival would be assassinated.

Obama’s spokesman said that her remark “has no place in this campaign”. But it had a place inside Hillary Clinton’s very warped brain which preferred to see Obama die than concede the election to him.

If that’s how Hillary felt about a fellow Democrat, imagine how she feels about Trump.

Even after Obama had clinched the delegate votes, Hillary’s speech brought back the Gore argument insisting that, “Nearly 18 million of you cast your votes for our campaign, carrying the popular vote with more votes than any primary candidate in history. Even when the pundits and the naysayers proclaimed week after week that this race was over, you kept on voting.”

Then the fabulously wealthy Hillary asked those 18 million people to go to her website and give her money while refusing to make any decision on ending her campaign. It took her another day to do that.

It’s not as if the Obama side was any better. It was arguably worse. Governor Wilder, an Obama ally, threatened a return of the 1968 Chicago Democratic convention riots if Hillary won. "If you think 1968 was bad, you watch; in 2008, it will be worse,” Wilder warned.

Unprecedented. Outrageous. Beyond the pale. Except this is how Democrats act even to each other.

Now how would they respond to a Trump victory? Would they urge Hillary to concede or to fight on? Would they stage more riots while claiming voter disenfranchisement had stolen the election?

Hillary Clinton has made it clear that she views Trump’s candidacy as illegitimate. She has called him “unfit” and described his supporters as “deplorables”. Democrats, all the way up to the White House, are constantly accusing Republicans of scheming to disenfranchise voters. These “schemes” involve asking undocumented Democrats to show some ID instead of relying on an honor system and removing illegitimate voters from the rolls. But beyond enabling voter fraud, such arguments can easily be employed to attack the legitimacy of a Republican winner. They provide the fodder for another Florida.

And, given the fact that Hillary won the nomination by using the DNC to rig the process, leading to the resignation of Debbie Wasserman Schultz, are Trump’s concerns of a rigged election illegitimate?

Donald Trump has clarified that he would accept “a clear election result” but that he was “being asked to waive centuries of legal precedent designed to protect the voters.”

And he’s right. No one preemptively cedes elections. And Hillary Clinton has faced accusations of abusive and fraudulent tactics from Democratic rivals in two different presidential elections.

Why should Republicans assume that she’ll treat them better than she treated Barack Obama and Bernie Sanders?

Not all that long ago, the left wanted Gore to fight to the bitter end. A Gore adviser recalled, "People were calling us from everywhere, telling us, 'Don't concede.'" Left-wing voices urged Bernie Sanders to stay in the race long after it became obvious that the left-winger had no realistic path to victory left.

But the same behavior that is virtuous when Democrats do it becomes an unpardonable sin when Republicans take it up.

That’s a pernicious double standard that cannot and should not be allowed to stand.

But democracy does not mean Democratic Party rule. That’s just the mistake that the media makes.

Whatever rules we have, run both ways. Any practices, new or old, also apply to both sides. If challenging election results is legitimate, then it is so for both sides. Whatever options were available to Gore and Hillary cannot help but be available to Trump.

That is how democracy, rather than Democratic Party rule, works.

Unfortunately, Trump has cleared the way for her not only to object but to be able to deflect any criticism of her for objecting.

I'm glad Trump said what he said because it put the Democrats on notice that Americans who support Trump will be looking out for voter fraud like that exposed by the Project Veritas videos last week.

Worth noting, Chris Wallace only asked Trump and not Hillary.