FAT, DRUNK AND STUPID IS NO WAY TO GO THROUGH LIFE: Hillary Discovered Stone Drunk at 4:30pm -- Wikileaks

Yes, should this walking RICO violation become president, rest assured that we'll be in the very best of hands. 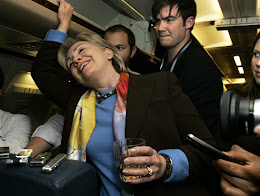 Hillary Clinton campaign aides had a frantic email exchange in August 2015 over who should call the candidate to “sober her up some” at around 4:30 in the afternoon.

According to documents published by WikiLeaks, Clinton campaign chairman John Podesta emailed communications aide Jennifer Palmieri with a question at around 2:00 p.m. “Should I call her and talk this through or better to leave with you?” Podesta wrote. “I’m worried she’ll get on with Cheryl [Mills] and we’ll end up in a bad place.”

Palmieri wrote back more than two hours later with a response: “I think you should call her and sober her up some.”

Hillary's problems with alcohol have been well documented and Wikileaks only confirms the reports.

I'd vote for Flounder any day over the beast with eyes that wander more than Bill in a field of 13 year-olds.

Your name pretty much tells it all...and either a troll or shill- maybe both.

Thanks for your sentiment,Bill Johnson.Not too hot on the non-adulation comment for your fearless leader,I guess.I just hope for the sake of the future of our country that the Clinton's lose big.Even though it might make you snarkier.

If you're meaning Donald, wandering eyes, I think you might want to look at SICK HILLARY, her eyes are crossed more than straight, Parkinsons is a bitch......

If you're meaning Donald, wandering eyes, I think you might want to look at SICK HILLARY, her eyes are crossed more than straight, Parkinsons is a bitch......

for those replying to my comment about poster 'millard filmore' --it was he/she I was replying to about THEIR snarky remark about Trump.
ANYONE who would vote for hrc - knowing her past and present crimes and corruption is either a fool or an idiot She would destroy the Federal Court system by installing judges who would further the destruction of the USA.....and has made deals with Bernie and Elizabeth warren to give them control of the Senate - so that they may completely socialize and bankrupt America.
Trump was a 'celebrity' for many years and he most likely said and maybe did untoward things - BUT - He is the only chance this country has to prevent a complete disaster.
I could go on but he is the first since Reagan, who was ok, or Steve Forbes who I wanted - to, MAYBE,give America A Chance.

and btw POTUS #13 has been for many years thought of as the most incompetent person to hold the office..until Carter...and now obammmma