Several weeks after a court ordered Ohio to stop cleaning its voter rolls from dead voters, likely raising the specter of voter fraud in the key battleground state, a new report reveals how Virginia and Pennsylvania — two other critical states — have seen hundreds of cases of non-citizens voting. That raises the question: Is the foundation of our democratic republic and national sovereignty no longer secure?

Earlier this week, the Public Interest Legal Foundation (PILF), headed by former Justice Department Attorney J. Christian Adams, released a pair of damning reports showing how the voting rolls in parts of Virginia and Pennsylvania are compromised with ineligible voters and that some of those voters have actually cast ballots in recent elections. What is more disquieting about this analysis is that it covered only a handful of counties via public record requests made through the National Voter Registration Act. Thanks to stonewalling from local election officials, a story Conservative Review first broke, PILF could not obtain comprehensive data on these two battleground states, which makes it all the more likely the number of registered voters who are non-citizens or otherwise ineligible to vote is much higher. 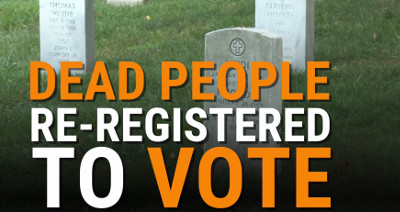 The Virginia report, which was the first to be released this week, found 1,046 non-citizens registered to vote in eight counties, who “cast a total of 186 votes between 2005 and 2015.” But here’s the kicker: This was a mere sample from 133 election jurisdictions in the state. And as PILF’s Adams noted in an article at PJ Media, this report does not cover “the behemoths of Arlington and Fairfax Counties.”

Moreover, Adams made it clear that this sample only covered self-reported aliens. “These are just the aliens who were accidentally caught because when they renewed their driver’s license, they told the truth that they were a non-citizen,” wrote Adams in the PJ Media article [emphasis in original quote]. Thanks to the Motor-Voter laws there is no way to require that states and localities use the federal SAVE (Systematic Alien Verification for Entitlements) database to check for non-citizens voting. Thus, most of the illegal votes actually reported are by those who legitimately didn’t realize they were ineligible to vote and checked off the box indicating they were not citizens when renewing their driver’s licenses.  That is how easy it is for non-citizens to vote and debase the entire value of citizenship and the sovereignty of our people.

Now imagine the total number of non-citizens registered in theses eight counties. Then, add another 125 localities, including the largest population centers in Northern Virginia with huge numbers of non-citizens.  Consider the following reality: Virginia is home to a large and fast-growing immigrant population.  According to Pew, there were over 1 million immigrants in Virginia as of 2014.  In 2013, according to the Census, the number of non-citizens in the state was 427,535, but given the fast pace of new immigration to the region, that number has likely grown.  If a random sampling from just eight counties showed over 1,000 non-citizens registered to vote, one can easily speculate that thousands more are registered statewide.

This random sampling on non-citizens voting dovetails well with a 2014 study from three prominent political scientists who found that up to 6.4% of all non-citizens participated in the 2008 elections and up to 14.7% voted.  Given the population of non-citizens in the state, that is potentially a very impactful number for any close election.

In a sane world, a discovery of this magnitude from such a tiny sample of registration lists should spark an immediate bipartisan push to verify every name in every country to ensure non-citizens are not voting.

Worse, unlike fraudulent voters, non-citizen voters cannot be stopped with voter ID requirements. As Adams notes, once states fail to screen out citizenship verification on the application, “the aliens are getting registered to vote when they are getting their photo ID cards!” Making matters worse, the D.C. Circuit Court of Appeals prevented a number of states from verifying citizenship on the federal voter registration forms used through the Motor-Voter process. This is on top of court rulings barring states from requesting a photo ID to vote.

Another must-win state for Republicans this fall is Pennsylvania. In a separate report released Tuesday, PILF discovered 86 registrants in Philadelphia who had their voter registration terminated between 2013 and 2015 due to non-citizen status. Among those illegally registered to vote, 40 ballots were cast. Again, these were only registrants who voluntarily asked to be stricken from the voter rolls. “That means the aliens who don't want to admit they committed a federal felony when they registered to vote remain on the rolls because Philadelphia election officials do nothing to detect them,” said Adams in an email correspondence. I can only speculate that this is an infinitesimal percentage of the total number of non-citizens registered to vote.

What is so sad here is that preserving the franchise for citizens and eligible voters should not be a partisan issue. In a sane world, a discovery of this magnitude from such a tiny sample of registration lists should spark an immediate bipartisan push to verify every name in every country to ensure non-citizens are not voting. The absence of such an urgent response can lead to no other conclusion than a willingness on the part of Democrats to steal the sovereignty of the citizenry.

As Adams observed, most of the counties in Virginia took active steps to prevent PILF from examining the voter rolls. In a world without ubiquitous malfeasance in government, public officials would welcome every opportunity to ensure that not a single non-citizen is registered to vote, especially after so many discoveries were made.

To be clear, if Donald Trump continues down the current path, the margin of victory for the Democrats will be large enough to overshadow voter fraud. But so many down-the-ballot races in recent years have been decided by tiny margins. Moreover, any path to 270 electoral votes for Republicans this year, or in future elections, will likely encounter slim margins of victory in states like Florida, Ohio, Virginia, and Pennsylvania.

As Professors Richman, Chattha, and Earnest concluded in the 2014 study, “non-citizen votes have also led to Democratic victories in congressional races including a critical 2008 Senate race that delivered for Democrats a 60-vote filibuster-proof majority in the Senate.”

The consequences of inaction are unconscionable. Here is an observation I made in “Stolen Sovereignty”:

Consider the following agonizing thought for conservatives. Obamacare is the seminal issue and the most consequential legislative victory of the Left this past decade. The bill passed the House 220-210 and garnered sixty votes in the Senate, the bare minimum needed to overcome a filibuster. During the 2008 elections, Democrats won two Senate seats by less than 2 percent. In 2006, they won three Senate seats by 2 percent or less. Some of these elections were decided by a few thousand votes. It is hard to imagine that there were not more than enough noncitizens to account for the entirety of the margin of victory in at least one of these races, thereby rendering Obamacare null and void.

Now, couple non-citizens voting with general voter fraud and the number of House seats Democrats gain thanks to illegal aliens being counted in the Census (states like California gain an extra five seats), and we are strangers in our own land! The average American citizen who wants to continue following our own system of governance, history, and traditions is left helpless while federal and state executives refuse to follow the statutes passed by legislatures to preserve the franchise. Meanwhile, the courts are preventing the people from reclaiming their sovereignty. We are suffering from a collective social transformation without representation.

Those like Judge Roy Moore in Alabama who adhere to existing state law are punished for upholding state powers regarding marriage, the most foundational tradition of all civilization. At the same time, public officials who do nothing about voter fraud and disenfranchise the citizens are free to do what they want while the courts stop the few patriots actually engaging in public service and protecting the integrity of our elections.

This perfidy began to get legs when the White Hut ordered the Census Director to report directly to the WH and not the Commerce Secretary. As a result there was treachery in the air in 2012, there's plenty more of it now. Thank a democrat, because of them, dead people can live.

keep sharing this posts.. these are awesome as always

And now 57 counties in Indiana are finding problems with fraud and the voter rolls.