CARL BERNSTEIN ON FBI REOPENING HILLARY PROBE: They Must Have Found a "Real Bombshell"

Carl Bernstein, of Watergate fame, appeared this evening on CNN to analyze the startling news that the FBI has reopened its investigation into Hillary Clinton. He offered some extremely interesting perspectives into Clinton's reckless and illegal handling of classified information.

Well, there's no question that the e-mails have always been the greatest threat to her candidacy for president, that her conduct in regard to the e-mails is really indefensible and if there was going to be more information that came out, it was the one thing, as I said on the air last night, actually that could really perhaps affect this election.

We don't know what this means yet except that it's a real bombshell. And it is unthinkable that the Director of the FBI would take this action lightly, that he would put this letter forth to the Congress of the United States saying there is more information out there about classified e-mails and call it to the attention of congress unless it was something requiring serious investigation. So that's where we are... 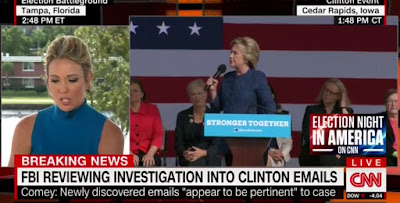 One thing is, it's possible that Hillary Clinton might want to on her own initiative talk to the FBI and find out what she can, and if she chooses to let the American people know what she thinks or knows is going on. People need to hear from her...

I think if she has information available to her from the FBI or any other source as to her knowledge of what these e-mails might be, hopefully she will let us know what they are and what is under discussion here.

Right now we're all talking in a vacuum but I want to add here that in the last, oh, 36, 48 hours, there has been an undercurrent of kind of speculative discussion among some national security people that something might surface in the next few days about e-mails, and I think the expectation in this chatter -- and I took it as just chatter but informed chatter, to some extent -- was that it would relate to another round of WikiLeaks e-mails, which our Justice Department people seem to be saying is not the case, but there has been some noise in the national security community the last day or two of this kind of possibility of some kind of revelation.

But this is her achilles heel and we have to remember that it also comes on the -- back to the word heel -- of the revelations about the Clinton Foundation. So the confluence of all of this is bad for her as it stands now but with some knowledge she might be able to stop, turn things around, and give us some idea of what's going on in a way we might not otherwise know, and also it's very possible that some members of congress very quickly are going to get an idea of what these e-mails are, and what this is all about, and for whatever purpose put some information out there.

Make no mistake, Bernstein is a shmuck. He has waited until the train picked up speed to jump on, there is no honor in that for he should have been leading the charge. In his grey hairs he has betrayed the American people, he is not the story.