Americans feel like they know everything there is to know about Hillary Clinton — and Donald Trump for that matter.

But there are five things you may not know about Hillary.

Clinton has flip flopped on issues from the Bin Laden raid to her own last name.

Hillary criticized Senator Obama’s position when he advocated for attacking terrorists havens in Pakistan before she took credit for advising him to send Seal Team 6 into Pakistan to capture and kill Obama Bin Laden. Clinton lies and hypocricy should not shock anybody, yet this duplicitous claim has gone under reported.

PolitiFacts reported back on February 27, 2008:

At the Democratic debate in Cleveland, Ohio, on Feb. 26, 2008, Sen. Hillary Clinton stole a line from Sen. John McCain and President Bush.

Clinton's line echoes recent comments by McCain, who told reporters Feb. 20 that Obama "suggested bombing Pakistan," and Bush, who said in a Feb. 17 TV interview that he didn't know much about Obama's foreign policy except that "he's going to attack Pakistan and embrace (Iranian President Mahmoud) Ahmadinejad. 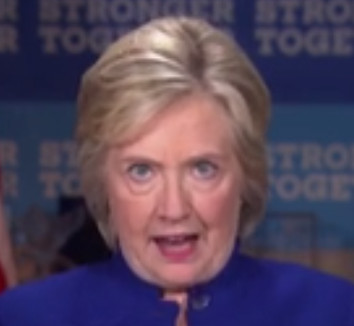 This was one of those issues that raised Republican eyebrows when Senator Obama argued that if he had actionable intelligence that bad guys were hiding in Pakistan, he would use it and not hesitate to act on it. A position that is reasonable and had many Republicans siding with Obama over McCain.


It was truly bizarre that Sen. McCain, R-Ariz. (F, 32%) and Hillary Clinton would hit him on that statement because it was the right position — and that hypothetical became reality when Hillary was secretary of state.

Obama’s position was mapped out on August 2007 at the Woodrow Wilson International Center for Scholars in Washington and said (as quoted by PolitiFacts):

I understand that (Pakistan) President Musharraf has his own challenges. But let me make this clear. There are terrorists holed up in those mountains who murdered 3,000 Americans. They are plotting to strike again. It was a terrible mistake to fail to act when we had a chance to take out an al-Qaida leadership meeting in 2005. If we have actionable intelligence about high-value terrorist targets and President Musharraf won't act, we will.

Hillary criticized that statement, yet she repeatedly bragged that she advised President Obama to go into Pakistan to get Bin Laden. According to a Washington Post account “Through weeks of sometimes heated White House debate in 2011, Clinton was alone among the president’s topmost cabinet officers to back [the Osama Bin Laden raid].” I guess she supported the raid before she opposed it.

Too bad Hillary was not as decisive during the Benghazi attacks when Americans were at risk. She seems to have run away from that disaster and you will not find heroic chapters in any of her books detailing her tough choices when it comes to Libya. All of her decisions with regard to the Libyan war and the Benghazi attacks were wrong.

Hillary was for traditional marriage before she became a self-proclaimed champion for gay marriage. What a profile in courage!

In 2004, Senator Hillary Clinton spoke on the Senate floor and said the following when voicing opposition to a proposed constitutional amendment defining marriage as between one woman and one man:

I believe that marriage is not just a bond, but a sacred bond, between a man and a woman. I have had occasion in my life to defend marriage. To stand up for marriage. I believe in the hard work and challenge of marriage. I take umbrage at anyone who might suggest that those of us who worry about amending the Constitution, are less committed to the sanctity of marriage. To the fundamental bedrock principal that it exists between a man and a woman going back into the mists of history as one of the founding, foundational institutions of history, humanity and civilization and its primary principal role in during those millennia are those raising and socializing of children into society where they are about to become adults.

Wow — she would be jailed as a deplorable hate monger for saying those things today.

Can you imagine if Donald Trump said those words during the last debate? Hillary would have called him a homophobic, anti-gay bigot. Only a Clinton could be 100% pro traditional marriage in 2004, then completely flip flop ten years later and make believe that she always supported gay marriage.

Although the Clinton campaign is apoplectic that Trump will not release his returns and evidently used a massive capital gains loss as a way to avoid paying taxes, Hillary seems to have done the exact same thing. From Zero Hedge:

While not on the scale of Trump's business "operating loss", Hillary Clinton - like many 'wealthy' individuals is taking advantage of a legal scheme to use historical losses to avoid paying current taxes.

I guess that makes her smart to avoid paying taxes, but a hypocrite for hitting Trump for taking advantage of the same tax law that she took.

Hillary Clinton acts as though she has had a long and distinguished career as a politician, yet her time as senator resulted in very few accomplishments.

According to a National Review Online piece from July 28, 2016 written by Nicole Goeser and John R. Lott, Jr.:

In her eight years in the Senate, just one of Hillary’s bills got enacted into law. This bill designated the U.S. courthouse at 40 Centre Street in New York City as the “Thurgood Marshall United States Courthouse.”

How does President Hillary Rodham sound? Before Hillary changed her name to adopt Bill Clinton’s last name, she had been a good feminist and refused to take his surname. One could not be a Clinton without flip flopping on an issue as central to a person’s being as one’s last name.

When Hillary Rodham and Bill Clinton were wed on Oct. 11, 1975, she kept her maiden name, not realizing it would become a controversial decision. After her husband's defeat for re-election in the 1980 Arkansas gubernatorial election, she changed her surname to Clinton. Voters had questioned their marriage's stability.

Shocking to think that in 1975 Rodham and Clinton had marital problems. Who knew?

These five facts are yet five more reasons that confirm American’s belief that Hillary Rodham Clinton is untrustworthy, duplicitous and dishonest. Clinton has flip flopped on issues from the Bin Laden raid to her own last name.