The 5 Most Disturbing "Donations" to the Clinton Foundation

“I’m thrilled to talk about the Clinton Foundation, because it is a world-renowned charity and I am so proud of the work that it does,” Clinton said in a response to a question from moderator Chris Wallace about possible conflicts of interest and impropriety.

These countries include states accused of human rights violations, economic interests in decisions by Clinton’s Department of State, and countries Clinton has pledged to confront if elected president. 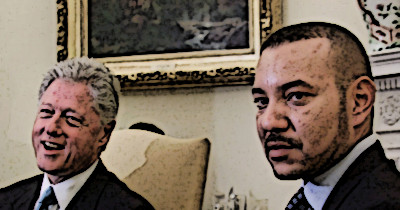 When Clinton first took office in 2008, the foundation disclosed that Saudi Arabia donated between $10 to $25 million, with some donations coming as recently as 2014 when Clinton prepared her run for the presidency. The foundation received an additional $1 to $5 million donation from the “Friends of Saudi Arabia,” which was cofounded by a Saudi prince. Critics question the ethics of taking such vast sums of money from individuals and a government with one of the worst human rights records in the world.

Emails released by WikiLeaks, in a likely attempt to influence the U.S. election, also reveal Clinton arranged for her foundation to host a meeting in Morocco in return for a $12 million donation from the country’s king. The donation came from a Moroccan state-owned mining company, which later received a $92 million loan guarantee while Clinton served as secretary of state.

“This was HRC’s idea, our office approached the Moroccans and they 100 percent believe they are doing this at her request. The King has personally committed approx. $12 million both for the endowment and to support the meeting,” Clintons aide Huma Abedin wrote in a leaked email to Clinton campaign chairman John Podesta.

In another troubling instance, foundation donations were closely linked to a uranium mining company tied to the Kremlin. Canadian leaders of a mining company funneled millions of dollars to the foundation while Clinton was secretary of state, at the same time they needed Department of State approval for the sale of their company to Russia. The Clinton State Department-approved deal gave Russia control of one-fifth of the entire uranium supply in the U.S.

The Clinton Foundation’s ties also extend to powerful individuals seeking assistance from the U.S. government, with the help of the Clinton network. Indonesian tobacco magnate Putera Sampoerna donated and worked with the foundation before he “got the U.S. government to underwrite millions in loans offered by the foundation and secured high-profile support for its activities from Sec. Clinton and other senior federal officials,” according to a report by The Washington Free Beacon.

The Clinton Foundation further accepted donations from several foreign governments while Clinton served as secretary of state, including Algeria, Kuwait, Qatar, and Oman.

In the instance of Algeria, the Clinton Foundation acknowledged to The Washington Post in 2015 it should have sought clearance from the Department of State’s ethics office before taking $500,000. After Clinton left office, the foundation received a large donation from the United Arab Emirates.

Do like the liberals do and control the language.
These are not "DONATIONS," They are "BRIBES."