FISCAL SUICIDE: Is Obama Opening Up the Federal Spending Floodgates to Get Hillary Elected?

During the last year of his reign of error, our beloved Nobel Peace Prize winner, Obama ran out of government accounting gimmicks to falsely proclaim Federal deficits have been falling. His legacy of debt accumulation will go down in history as the last dying gasps of a crumbling empire built upon Keynesian delusions, political corruption, and a Deep State establishment hellbent upon retaining power at the cost of global war and financial collapse.

The entirely fabricated government propaganda data point known as the Federal deficit skyrocketed by 34% in fiscal 2016 (Federal year is Oct. 1 to Sept. 30). The reported deficit in FY15 was a mere $438 billion. Obama and his brain dead minions had boasted about such a small deficit. The country has been in existence for 227 years and Obama had the balls to boast about “achieving” the 8th highest deficit in our history. Just for some context, the savior also led the country to the 1st, 2nd, 3rd, 4th, 5th, and 6th highest deficits in the country’s history. Bumbling Bush achieved the 7th highest in the glorious year of 2008.

The $149 billion surge in the reported deficit to $587 billion is a national disgrace and happened during a year in which we supposedly aren’t waging any real wars. Even with artificially suppressed interest rates, interest on the national debt went up by $30 billion. The Obamacare abortion has caused healthcare spending to soar, blowing a hole in the Federal budget. Remember Obama bloviating about Obamacare not adding one dime to the national debt? He was right. It’s adding trillions of dimes to the national debt. But, at least every family in America has gotten that promised $2,500 savings in their annual premiums. Right?

Another reason for the surge in the reported deficit is the little accounting trick the Obama administration has been playing for years. Fannie Mae and Freddie Mac are insolvent zombie Federal Agencies. With the suspension of mark to market accounting in March 2009, Wall Street banks and these bloated pig agencies were free to fraudulently value the mortgages on their balance sheets.

Poof!!! Wall Street bank profits miraculously recovered. Fannie and Freddie began reporting tens of billions in fake profits. They then pretended to pay these fake accounting profits to the Treasury, thereby “reducing” the reported deficits. Last year Fannie and Freddie ran out of fake profits and are now losing money again. And the establishment wonders why the peasants are revolting.

What is more fascinating is the virtual halt in Federal revenues. They grew less than 1% in FY16. How could that be? The corporate mainstream media, the government apparatchiks, and our esteemed leader Obama assure us the economy is growing, unemployment is a minuscule 5%, and everything is coming up roses. Vote Hillary to keep prosperity growing. If the economy was growing, corporate profits would be higher, leading to more taxes paid to the government.

If employment was as strong as I’m told, all those employed Americans would be filling the Federal coffers with dough. Oops!! Corporate tax receipts are plunging. The $1.55 trillion of individual income taxes extracted at gunpoint by the Feds was flat with the prior year. Someone might be lying about that growing economy and awesome jobs numbers. 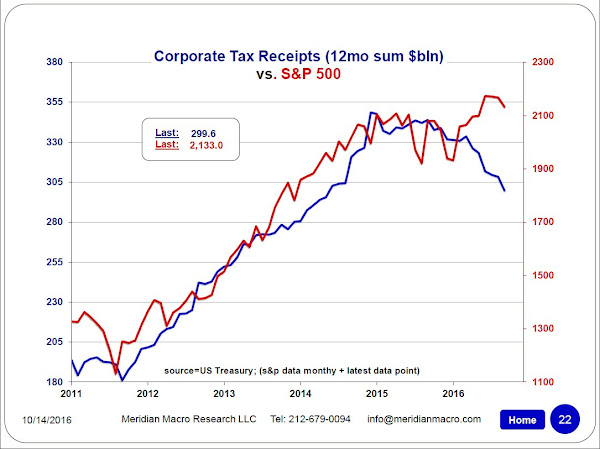 Now for the best part. The $587 billion reported deficit might be a smidgen low compared to the real deficit. The sliced, diced and massaged for a happy ending, reported deficit number has no relation to the actual deficit. Interest is paid on the national debt, not fake government accounting deficits. The real question is how much did the national debt go up in FY16. The answer is: we have no fucking idea.

First, let’s dispense with the notion it went up by $1.4 trillion as many people have been reporting. It did not. Our feckless politician drones happened to have one of their regular government shutdowns that crossed the FY15 and FY16 fiscal years. They pretended the national debt stopped in its tracks during the shutdown. It did not. The government continued to take in revenue and spend like drunken sailors.

It seems the FY16 REAL deficit was only $395 billion higher than the BULLSHIT deficit reported by Obama and his minions. Close enough for government work, I guess. Which number do you believe? It’s a damn shame the average American is mathematically challenged, willfully ignorant, and more knowledgeable about Beyonce’s fashion line than the national debt. So it goes.

To put this in perspective, our leaders didn’t think adding $2.1 billion of debt per day ($87.5 million per hour; $1.46 million per minute) on the backs of unborn future generations was quite enough. They decided to ramp it up to $2.7 billion per day in FY16, a 29% increase. At least these humongous deficits led to a booming 1.2% GDP growth and real household income at 1989 levels. Well done Obama and fellow Keynesian minions. Krugman and Summers think the politicians are pussies for not spending more.

Well it appears Obama and the establishment, in an all out effort to stop Trump, have decided to turn the spending up to 11. It seems rather odd the Federal government added $191 billion to the national debt over the last Three Months of the fiscal year, but has decided it was prudent to add $147 billion in the first Thirteen Days of October. That is an increase in the daily rate of debt accumulation from $2.1 billion per day to $11.3 billion per day. Only a 538% increase. Sounds legit. Right?

Let’s face the facts. The establishment is terrified of Trump and his deplorables. They are using their power of the captured corporate press to scorn, ridicule and destroy him. They are using falsified polls to convince the non-thinking masses Hillary is a mortal lock. They are throwing as much false shit at the wall as possible, hoping some of it sticks.

They know the economy is in the shitter and the average American is not better off than they were four or eight years ago. As a last ditch effort to keep this tsunami of history from rolling over them and sweeping away the last vestiges of their corrupt rule, they have ramped up the printing presses and government spending to try and make the masses believe the economy is hitting on all cylinders. It will fail, and the peasants will be coming for them.