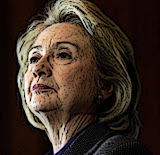 The stain of corruption darkens everything that the Clintons touch.

Second only to national security, it is the responsibility of the president to uphold the law, not to position him or herself above it.

Setting the wheels of corruption in motion, the Obama administration has fundamentally transformed the Department of Justice (DOJ), the Federal Bureau of Investigation (FBI) and the Internal Revenue Service (IRS) from law enforcement agencies into political hit-squads dedicated to suppressing opposition, silencing criticism and protecting the powerful from the consequences of their criminal activities.

In July of this year, Judicial Watch obtained FBI documents through a federal court order in a Freedom of Information Act (FOIA) lawsuit, which showed the following:

(1) “IRS officials stated that the agency was targeting conservative groups because of their ideology and political affiliation”;

(2) The FBI and DOJ had an abundance of evidence “suggesting illegal targeting, perjury, and obstruction of justice”;

(3) “Both the FBI and the DOJ collaborated with Lois Lerner and the IRS to try to prosecute and jail Obama’s political opponents”; and

(4) The FBI investigation “looked the other way when it came to Obama’s IRS criminality.”

Also in July, FBI Director James Comey provided shocking details from the Bureau investigation, saying that Clinton and her team at the Department of State were “extremely careless” when it came to handling classified materials; it found 110 emails on 52 separate threads that contained classified information. Yet Comey made the appalling decision not to refer the email server evidence for prosecution by the DOJ; according to a Fox News report, one person close to the yearlong probe claimed that career agents and attorneys involved in the case “unanimously believed that Hillary should have been charged.”

Not only did Comey inappropriately absolve Clinton of any wrongdoing, he offered immunity to her aides, seemingly to obstruct rather than facilitate further investigation; he allowed witnesses of the alleged criminal activity to serve as Clinton’s “lawyers”; and he physically destroyed evidence contained on the laptops of Clinton’s staff.

Recently released FBI documents, according to Powerline, indicate that Clinton aide Patrick Kennedy “tried to bribe the FBI to change the classification of a Benghazi document so as to enable Hillary’s false claim that she didn’t send or receive classified information on her illegal home server.”

In addition, had email exchanges with her IT expert Bryan Pagliano, undermining a claim, made under oath, that she did not recall discussing with him the management of the private, unsecured email server she used at State — a server we can now conclude was set up to conceal the “pay to play” scheme between the Department of State and the Clinton Foundation.

Of those cases described in Peter Schweizer’s book “Clinton Cash,” one directly affected national security. Rosatom, a state-owned Russian company, gained control of one-fifth of America’s uranium reserves. “Shortly after the Russians announced their intention to acquire a majority stake in Uranium One,” states a New York Times report, Bill Clinton “received $500,000 for a Moscow speech from a Russian investment bank with links to the Kremlin that was promoting Uranium One stock.”

We now learn through James O’Keefe’s Project Veritas that Hillary Clinton and her acolytes have used unethical and perhaps illegal means to secure her election to the presidency, including using hired “provocateurs,” some even mentally ill, to instigate violence at Republican events. The clandestine videos also revealed discussions of voter fraud schemes taking advantage of sloppy registration policies for the purpose of registering otherwise ineligible voters. In another Project Veritas video, a Democrat activist who bragged about disrupting campaign events was found to be on Clinton’s campaign payroll after a search of Federal Election Commission records was conducted.

Electing Hillary Clinton will be an endorsement of permanent political corruption and consent for the use of government as an instrument to extinguish dissent.

I am voting for TRUMP because I want Obamacare repealed, adherence to our country's immigration laws, a fence biult to keep people from illegally entering our country, and I would like to see our country follow our country's Constitution rather than have laws for the everyday American and laws for our political elites.