Commenter rls provides a business owner's reaction to the effects of the Obama Wealth Redistribution™ Plan.

...here is a very true first person scenario. I am 60 yrs old and have owned my business for 24 years and I currently have seven (7) employees that my business provides a decent living for. The longest tenured employee has been with me for 17 yrs. 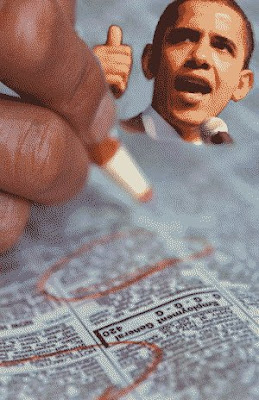 I'm not going to get into the $250,000 argument, I simply do not trust Obama and the Democrats. I personally think that everyone that pays taxes will get an increase in taxes once they let the Bush tax cuts expire. However I am going to close my business, lay off my employees and sell my equipment and buildings before January 20th, IF Obama is elected.

I had planned on working two more years and trying to line up financing so my employees could buy me out and then I would stay on one more year (as an employee) and help them transition. Now it is not a big operation and I would sell it to them just south of 1 million, which would be at a discount (actual asset value).

Obama's stated intent is to raise the capital gains tax to 20% (from 15%). That is what he has said he would do....that doesn't include the possibility of what he might do. Now you might not think that the extra 5% is much of nothing, but I have real property (commercial) that has increased significantly over the last 20 years and that extra 5% is going to cost me a pretty penny.

So, Senator Obama's election is definitely going to put seven (7) employees out of work and impact my current vendors to the tune of about a half a million per year, one small supplier rather dramatically.

That is how taxes impact small businesses. Small businesses, by nature, want to grow....as they grow, they add staff, they buy more inventory, they invest more in plant and equipment and thus they end up paying more (dollar wise) in total taxes.

When they are constricted by onerous tax rates, they have no choice but to curtail operations, lay off employees, shrink their business...or like I am going to do, just get out entirely and let someone else deal with the "new" economy.

IF, and it still is "IF", Senator Obama is elected, the tax revenue for "spreading the wealth" won't come from me, so you guys will have to pick up my part, and the part of every other small business owner who sees this as I do and is able to bail out.

The tipping point is 49% paying and 51% taking. Wonder how close we'll be in two years of a President Obama's term.

The Obama Wealth Redistribution™ Plan forces the most successful business people to downsize. To retrench. To lay people off. Change!

Now that I think about it, I never got a job from a homeless person.
at 9:12 PM
Email ThisBlogThis!Share to TwitterShare to FacebookShare to Pinterest
Labels: Democrats, Obama